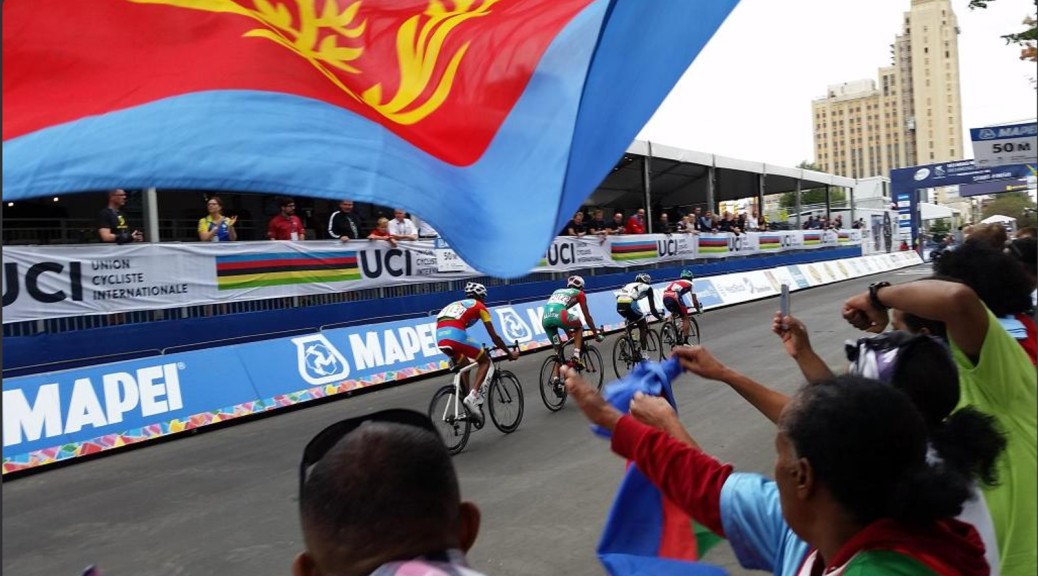 For Anthropology of the Crowd, VCU students became anthropologists engaged in data collection and research about the crowd gathered in Richmond for the UCI World Championships Bike Race. My goal was for students to be on the ground, in the crowd, experiencing the race, and thinking about the great variety that makes humanity, all from an anthropological perspective.

“One thing variation in a crowd setting shows us is a sample of human diversity.  Staying in one place for a long time can distort our idea of the larger world and its inhabitants.  We tend to only think about the world as being our little bubble in which we live, and looking at variation among people in an international crowd is a reminder of the scope and breadth of humanity across the world.  It puts us in a globalized perspective and allows us to think about our place in the global community.” – Brenna, Crowd Anthropologist

Forgot I had this fun pic of the crowd from Libby Hill during the race #VCUanthcrowd pic.twitter.com/6RaNy4W52U

#vcuanthcrowd A great pic of fans repping #usa #Colombia and #canada on the last day of the race pic.twitter.com/PUUJfBtoyr

Twenty-seven VCU students immersed themselves in the crowd, asked questions of spectators, and experienced what it is like to think about humanity from an analytical perspective. Altogether, the students interviewed more than 200 crowd members, and asked them questions about their languages, homes, practices, and perspectives. The Crowd Anthropologists then used the data they collected from their crowd population to ANALYZE HUMANITY.

“This class wasn’t a traditional class, it taught us  its material in  a different way , it did not tell us about it, no it let us experience it first hand. This class is open; meaning there are not many rules on how to understand the material. The whole point, is to see it with our eyes and feel it in our heart. We learn how to deal with people, collect data, analyze a sample of people, and try to make up what the data means and implies.” – Farah, Crowd Anthropologist

Collecting data was not always easy, however.

“For me, the hardest part of collecting data was not only initiating conversations with strangers, it was appearing calm and comfortable while I was doing it.” – Magen, Crowd Anthropologist

“At first it felt a little anxiety inducing, being tasked to converse with people for any sake other than conversation itself always make me feel a little on edge.” – Laxmi, Crowd Anthropologist

But pretty soon, the students started thinking more about what they could learn, and the value of the experience they were having.

“Interviewing people felt amazing, I wanted to see more people, so I went to the start line and the finish line and there the real fun began, there were tons of people there and from many foreign language, I was so happy to cheer for the cyclists with them and taking picture of them and the bike racers.” – Farah, Crowd Anthropologist

“The easy-goingness of the people I interacted with in the crowd in return made me feel more at easy about the interview and data collection process. So what initially started as something that gave me anxiety, ended as an insightful and positive experience.” – Michelle, Crowd Anthropologist

“Honestly it was a fun experience and something that I would like to do again. The best part about collecting the data is meeting new and international people!” – Ahmad, Crowd Anthropologist

“I think that this course was a great introduction to such methods of data collection.  This was my first experience interviewing people in a crowd, and although it was difficult at first, it became easier as time went on.” – Janos, Crowd Anthropologist

This guy likes his #race with a #chilidog #vcuanthcrowd we got the interview done without cessation from his feast! pic.twitter.com/1LNTfMknAQ

Students discovered for themselves how they might analyze humanity, and in doing so, how people from all over the world can talk about bikes in a variety of different ways (chart created by Crowd Anthropologist Janos),

how far people were willing to travel to be a part of the race (map created by Crowd Anthropologist Charles), what languages were spoken by interviewees (figure created by Crowd Anthropologist Erin), where the members of the crowd called home (figure created by Crowd Anthropologist Tori), and how the crowd cheered for their favorite teams (chart created by Crowd Anthropologist Michael). Students developed into Crowd Anthropologists: surveyors of humanity, paying attention to the details of the linguistic, sociocultural, and biological variation they were surrounded by. They were also asked to share their impressions of the crowd – and sometimes the data they collected – using #VCUAnthCrowd.

Crowd Anthropologists collected data that reflected biological variation in the crowd, and worked together to display it in some graphic or visual representation that captured that variation. Was the crowd as diverse as they expected? What kinds of world variation were represented by the crowd?

“The crowd was like a rainbow with all its beautiful colors.” – Veyn, Crowd Anthropologist

“…the race was able to reflect a sample of the crowd that was both diverse and international, it succeeded to show us a sample of the huge world we are living in, and it shaded the light on how our differences made life more tolerable and interesting, if we were all the same, life would be dull and colorless.” – Farah, Crowd Anthropologist

“What we are able to learn about variation from this specific sample is that you need a large enough sample in order to have a good representation of the population and so that you are able to produce results that accurately reflect the significant differences within the sample.” – Michelle, Crowd Anthropologist

“…the Racers themselves represented a nice portion of the worlds diversity it was still a far cry from a complete picture of humanity.  One could say the race provided a good sample of the European diaspora or that it’s a good representation of the disposable income disparity between different parts of the world.” – Charles, Crowd Anthropologist

“We knew our sample was supposed to be of the crowd and we all thought this crowd was representing the world. One major thing we can learn from variation is to remember to account for what exactly is being represented in the sample.” – Maria, Crowd Anthropologist

They also considered the crowd through the material culture that it might leave behind – what would the Bike Race archaeological assemblage look like? Several students complained that not much material culture was being left behind… because the volunteers were doing such a great job of cleaning up after everyone!

Of course, it was hard for the students to resist getting excited about the race itself.

(oh wait, that’s my picture… I got really into it too, especially this story about the first Rwandan woman to compete in these races. Crowd Anthropologist Lucia was also moved by this story!)

Crowd Anthropologists were asked to reflect on their favorite parts of the class, and their answers are just as varied as the students themselves. I am proud of how these VCU Rams explored the world around them.

“One thing that really stuck out to me about the way Richmond held the race was the emphasis put on by the race of being green…. As someone who tries to conserve and preserve for the sake of the Earth, I really valued that Richmond thought of these things.” – Maria, Crowd Anthropologist

“Just for a few hours, everyone is smiling, applauding, cheering. Everyone in the crowd has their own hardships and tragedies they are facing at their own respective homes, but within the here and now, everyone is happily gathered to watch some bikes zoom by. I couldn’t even spot a frown anywhere. Nothing but good vibes emanating from everybody and reverberating off of each other.” – Laxmi, Crowd Anthropologist

As an instructor for this course, I learned more than I expected to. What does engaged learning really mean? How can students be active in their own development as scientists? How best to support students as they navigate their own way through experiences that might feel uncomfortable for them? With 27 students, it was a challenge to keep up with the data and reflections as they came pouring in, and it was nearly impossible to pick pieces of their work that represent how the class as a whole developed. But I can’t wait to try a model like this again, and I am so pleased with the experience the students had. For some highlights, see the links below, or go to the “Our Analysis” tab to see how the students evolved as Crowd Anthropologists through the week.