This video is about a trip around shanghai. It captures the beauty of shanghai.  the video shows popular shanghai attractions while acting as an example to lesson 5, ” A trip to China.” We see the tall modern buildings of shanghai while also seeing the old streets. The video takes us from popular market places in shanghai to the china art museum located in shanghai. We also get to see local shanghai dishes. I found this video helpful as it showed me the insights of shanghai and i hope i get a chance of going myself. 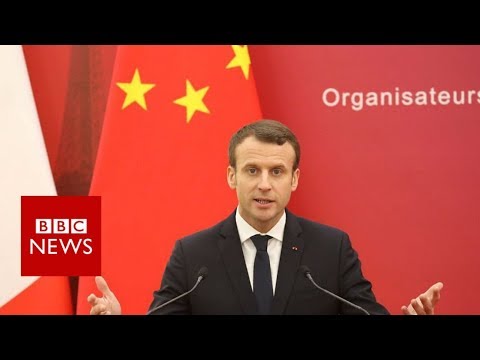 This video is about the French president trying to speak Chinese. French president was giving a speech to the Chinese people. He is learning Chinese in the video. He speaks Chinese to appeal to the Chinese people. Chinese people have positive reaction to this speech. It is nice to see other country’s leader trying their best to understand other languages. This video is helpful because it shows other people learning to speak Chinese. I think it’s important for students to see how other people are learning Chinese.

This video shows a native English speaker asking Chinese people how to pronounce and write different Chinese characters. I really liked this video because it shows you that everyone has problems with Chinese. Students often struggle with Chinese because of the different tones and characters but don’t worry Chinese people are to. It’s more of an encouraging video to those studying. I also liked his point at the end of the video about learning traditional Chinese and his comparison to it for English.

This song has simple lyrics. I found this song with the English, Chinese and the Pinyin. It is a slow song that is easy to learn. It is also a popular song so you can sing it with your Chinese friends. I think learning a language with songs is very helpful. By learning simple songs you can practice the more basic phrases to help with your speaking.

In this video, you can see a couple traveling around in Shanghai. They to around many places to eat food. It shows many delicious snacks around Shanghai. You can also see the how they travel from place to place at Shanghai.  Introducing street name and how to get there. People could see some ancient building in this video. This video is great for our class because in one part of the video he talks about around direction. Which is something we are learning in class right now. Telling us how big and small the building is. Shanghai is a traveling spot for most people and i think that people would be interested to come to this place. Tieba is a forum website. This website can help students to practice reading and writing informal Chinese. Tieba has a lot of contents, for example: games, sports, short novels etc. Registered users can “paste” comments, post pictures, and videos for other users to see. If you have a Tieba account, you can reply to other users comments or questions. I think Tieba is useful because you can discuss and participate in interesting things with other users.

My Teletandem partner, Amber, shared this song with me. Amber says this band is very famous in Taiwan. Everybody loves listening to their music. This song is called “Cheers”. When Taiwanese people, Chinese people and other people that speak Chinese are drinking beers, they often say “cheers!” to celebrate good times. Indeed, this video celebrates good times. In the video, we can see the life of a man from beginning to end. First he goes to school, becomes friends with his classmates and joins a band. Then he joins the military. Then he becomes a worker and meets his girlfriend. Then, him and his girlfriend get married and have children. In the end, the man becomes old and goes to the hospital, where he does of an illness. At the end of the video, the man goes to heaven, where all his friends greet him and wave goodbye. This video is very beautiful and celebrates life’s memories. I also think the song is really good.