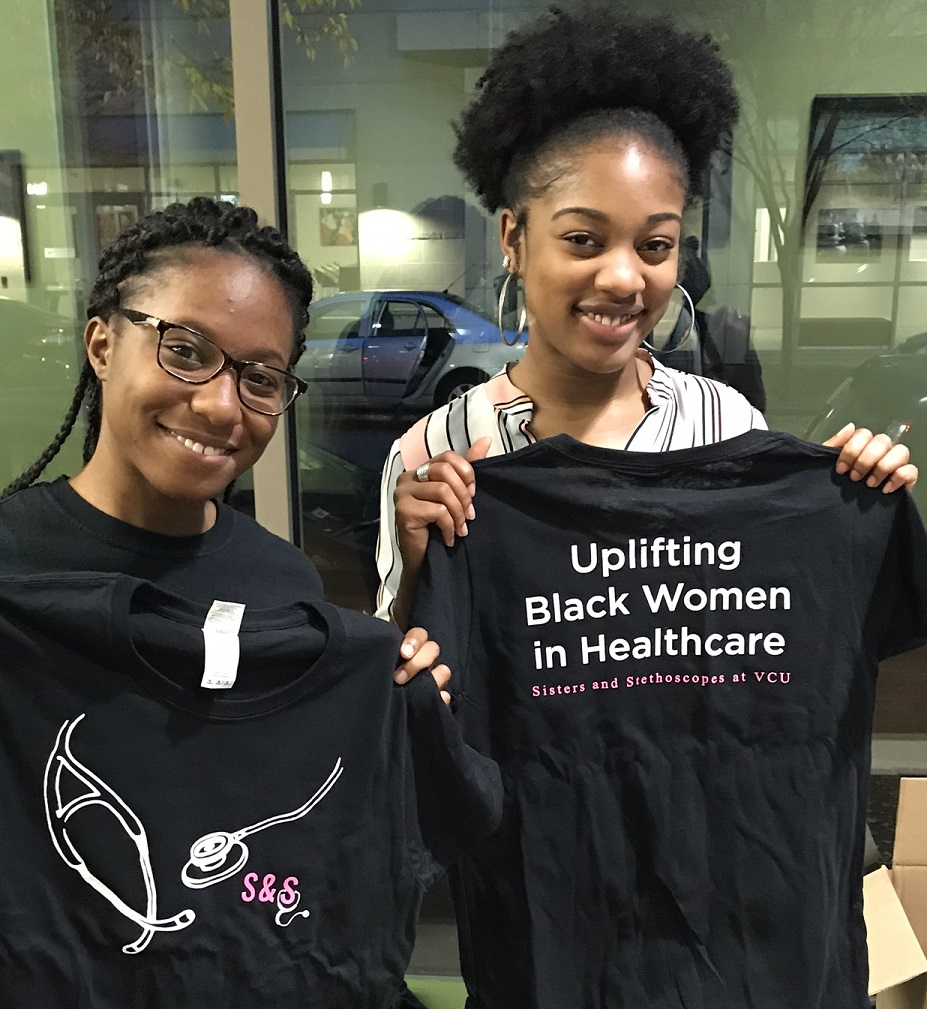 Richmond, VA — A 59-year-old man starts feeling extremely dizzy and calls 911. EMTs rush him to the hospital where an admissions specialist records some vital information, an imaging technician takes a series of MRI studies of his heart and a nursing assistant preps him for emergency surgery. A cardiac researcher has discovered that patients with similar symptoms may be suffering from a condition called Sarcoidosis. After a specialized pacemaker is implanted, a systems analyst reviews the device’s remote monitoring system and a physical therapist is brought in to develop a follow-up recovery plan for the patient.

This scenario was described to an auditorium full of dozens of high school students at VCU’s first-ever High School to Health Care (HS2HC) Symposium sponsored by the Pauley Heart Center this past Saturday. What was unique about the presentation? Except for the brief mention of a surgeon, no medical doctor seems to play a significant role.

Before the event, Megan O’Hare, the symposium administrator, explained that this was a very intentional choice. “There are a lot people who do a lot of work to support doctors and nurses,” she said. The symposium was designed to highlight the dozens of lesser-known health care-related careers that are available to young people that they may not even know exist. “With the symposium, we’re giving everyone [at the hospital] a chance to show off what they do,” O’Hare said.

The symposium was open to sophomores, juniors and seniors from any high school in the Richmond area and nearly 100 students woke up early on a drizzly Saturday morning to attend. The event kicked off with two different scenarios described and after each, a slate of VCU Health employees explained which role they would have played  and also gave a brief synopsis of their educational background.

The symposium was the brainchild of Dr. Greg Hundley, the newly appointed director of the Pauley Heart Center, who participated in a similar program in his previous job at the Wake Forest School of Medicine in North Carolina, according to O’Hare. Hundley designed the symposium to highlight the various pathways people take on the way to working at a hospital.

Many Pipeline Programs Started in the 1970s

The HS2HC seminar is the latest in a growing number of so-called “pipeline programs” shepherded by VCU’s Division for Health Sciences Diversity (DHSD). In fact, division director Adrien DeLoach sees the administration of these programs as his principle mission.

“It’s funny,” DeLoach says, “Whenever I say the name of the division, no one has any idea what it means. So I always say that we’re the health sciences pipeline programs office and people go, ‘oh, okay!’”

DeLoach’s division promotes programs for students starting as early as sixth grade, but he says they really zero in on kids when they hit 10th grade

“We want to stimulate their interest in the health sciences and showcase the variety of options,” he says. “We get plenty of kids who think ‘I’ll be a doctor or a nurse.’ Our job is to say, ‘OK, but did you know about occupational therapy, physical therapy, rehab counseling, exercise physiology?’”

Students in underrepresented populations face specific challenges due to lack of awareness and lack of role models,” Deloach says. “How often do [minority students] see a healthcare professional that looks like them? We’re working to produce a more diverse population of professionals in part to inspire the next generation of potential doctors, nurses, technicians and therapists.”

Offices like DeLoach’s were created by many universities as a result of the national Health Care Opportunities Program (HCOP) that has its seeds in the 1970s. Even with decades of support for these kinds of initiatives, the pursuit of health care careers by minority populations continues to lag (see interactive data visualization below). According to a 2017 report, less than 5 percent of American physicians are African-American, compared to an overall workforce that is almost 12 percent African-American. The ratio is even more stark in other health care careers: less than 2 percent of optometrists are African-American, for example.

At VCU, the focus on supporting diversity in health care extends beyond these official pipeline programs. On-campus groups that bring together minority students with similar interests have proliferated in recent years and new ones continue to pop up. This fall, a local chapter of the Coalition of Occupational Therapy Advocates for Diversity (COTAD) was formed, led by 3rd-year OT student Dominique Lopez-Piper. As with many of these groups, their goals don’t just involve promoting jobs in the health care field. Members insist that embracing diversity is essential to being an effective clinician.

“As future occupational therapists, we’re constantly focusing on inclusivity,” Lopez-Piper says. “I believe that in order to fully ‘walk the walk’ we must consider all of the spheres that people might identify with, so that we can provide meaningful and effective care.”

So far, COTAD has sponsored several events, each starting with a case study highlighting a patient interaction where cultural issues played a factor. For Lopez-Piper, working on COTAD dovetails with an activist bent among many young people. “I was a sociology major with a minor in social justice,” she says. “I love being able to bring the two worlds of advocacy and OT together. Finding COTAD was a true ‘ah-ha!’ moment for me.”

Andacia “Andy” Rhyne serves as president of Sisters & Stethoscopes, a VCU group currently in its second year of operation. An event called, “Let’s Talk About Sex,” this past Friday drew more than 20 S&S members to a panel discussion about sexual health led by VCU Health employees as well as a representative from Planned Parenthood. The group supports African-American women interested in any of the health professions.

“We’ve grown quickly since we started last year: we have about 35 members now,” Rhyne said. Among the projects the group has initiated is a partnership with a local group called Work of Art to mentor high school students interested in health care careers. “We’re still fine-tuning things but I’m excited about where we’re headed,” Rhyne said.

While specific groups may focus on different aspects of the health care career pipeline, the idea behind both the administration-led and student-initiated efforts seems the same. As explained by Megan O’Hare of HS2HC, “Health care professionals save lives, which can be pretty exciting, but there are a lot more people involved in saving lives than just doctors or nurses.”

The visualization below includes data from the 2017 report from the US Department of Health and Human Services report, “Sex, Race, and Ethnic Diversity of U.S. Health Occupations (2011-2015).” Selecting a health care career from the drop-down list shows percentages of the 2015 American workforce in that profession (top graph) broken down by race and ethnicity. These data can be compared against the same breakdown for the workforce as a whole (bottom graph). Click here for full screen version.

Special thanks to the CEI New Faculty Orientation Development Committee:

Special Thanks to Jeff Everhart and the VCU Alt-Lab team.

This work is licensed under a Creative Commons Attribution-NonCommercial 4.0 International License.

See the latest on VCU's reopening