These 3d-printed zoetrope sculptures were designed by John Edmark, and they only animate when filmed under a strobe light or with the help of a camera with an extremely short shutter speed. He shares about the project:

These are 3-D printed sculptures designed to animate when spun under a strobe light. The placement of the appendages is determined by the same method nature uses in pinecones and sunflowers. The rotation speed is synchronized to the strobe so that one flash occurs every time the sculpture turns 137.5º—the golden angle. If you count the number of spirals on any of these sculptures you will find that they are always Fibonacci numbers.

For this video, rather than using a strobe, the camera was set to a very short shutter speed (1/4000 sec) in order to freeze the spinning sculpture.

If you happen to have a 3D printer handy, you can find instructions on how to make these over on Instructables. (via Stellar—I have a few Stellar invites, first three people to email get ‘em) First off: language warning for the kiddos. Stop-motion animator Dillon Markey works on projects for animation powerhouses like Robot Chicken and PES. While on set three years ago Markey tired of moving back and forth between the set, camera, and computers for each shot and conceived of a numerical keypad he could use to help control some, if not all, of the devices he uses for animating.

In a stroke of nostalgic brilliance, he realized Nintendo’s failed 1980 Power Glove—a wearable device that was supposed to offer novel ways of controlling video games—posessed the form factor he needed. While the Power Glove itself was a commercial flop because of imprecise and awkward controls (not to mention crummy games), Markey teamed up with an electrical engineer to completely rewire the device so it could interact with his stop-motion software via Bluetooth. In a move that would make Inspector Gadget proud, he further modified the glove to incorporate animation tools like retractable tweezers and special sensors that emit the perfect phrase when you use the glove for a fist-bump.

One would think such modifications would be interesting for the purpose of making a quick concept video like this, but that in practical application it might not really work. Not the case: he’s now used it for over 1.5 years on projects like this. It makes you wonder what other outmoded technology had the right form factor but wrong application? Film by Ava Benjamin.

One of my all time favorite animated shorts.
This little animation not only uses sound very well, but conveys a fantastic love for family and food. 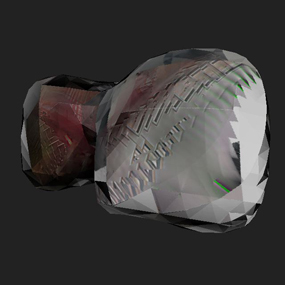 INTERP is a series of digital sculptures generated by blending 100 unrelated photographs, placing them into simulated three-dimensional space, and importing them into photogrammetry software, tricking it into thinking that the photographs were of a single object. Thompson is interested in “useless” and culturally-derived data sets, so rather than use an arbitrary archive of photographs (a Google image search for a particular term, for example), it seemed more natural to use a finite set that he had generated himself (approximately 12,000 images when he began the project in 2012). Every photograph was used.

INTERP is a 2014 commission of New Radio and Performing Arts, Inc. for its Turbulence website. It was made possible with funding from the National Endowment for the Arts.

Jeff Thompson received his BFA from the Minneapolis College of Art and Design and his MFA from Rutgers University. He is currently Assistant Professor and Program Director of Visual Art & Technology at the Stevens Institute of Technology in Hoboken, New Jersey. Thompson has exhibited and performed his work internationally at venues including the Museum of the Moving Image, Sheldon Museum of Art, the Taubman Museum of Art, SITE Santa Fe, Bemis Center for Contemporary Art, the Jersey City Museum, and the Weisman Art Museum. Thompson’s visual and written projects have been published by Ugly Duckling Presse, the Parsons Journal for Information Mapping, and Leonardo Electronic Almanac (MIT Press), among others. In addition to his studio practice, Thompson curates exhibitions through Drift Station, a curatorial collaboration that mounts international, experimental exhibitions.