There’s a weird account on Twitter. Its author sounds like someone who’s desperately looking for a cyberpunk scenario, trying to impress its tutors of media art with a ‘subversive’ idea for a graduation project or maybe coming up with the worst possible critical design concept. It’s actually neither of those. Or rather it could be all of that and more.

Behind @predarbot‘s tweets is a program that combines the headlines of articles recently published on websites specializing in digital art and hactivism and then it randomly turns them into titles for potential artworks that ‘critically explore the intersection between art and technology’ (not the bot’s words but the canonical description used by pretty much every single media art event i’ve ever attended.)

The bot effortlessly predicts an infinite number of likely, possible, almost ­existent or even nonsensical proposals all of which are in line with the jargon currently in use. In this absurd manner, the Predictive Art Bot works towards the generation of an exhaustive series of all the possible automatic artistic responses and trends that may arise in the future. This algorithm’s constant production of “reflex art” that takes the form of simple utterances means that it, in turn, continually induces mental projections generated by this stimulus.

The twitter page is part of Predictive Art Bot, a project launched a few weeks ago by Maria Roszkowska and Nicolas Maigret. With this work, the duo is inviting other artists to collaborate with the bot, interpret some of the most puzzling/exciting/provocative tweets and turn them into real prototypes, drafts for impossible projects, live performances, failed experiments, etc. They have even managed to get grants from well-known media art festivals to finance and exhibit some of these experiments. No matter which shape they might eventually adopt…. 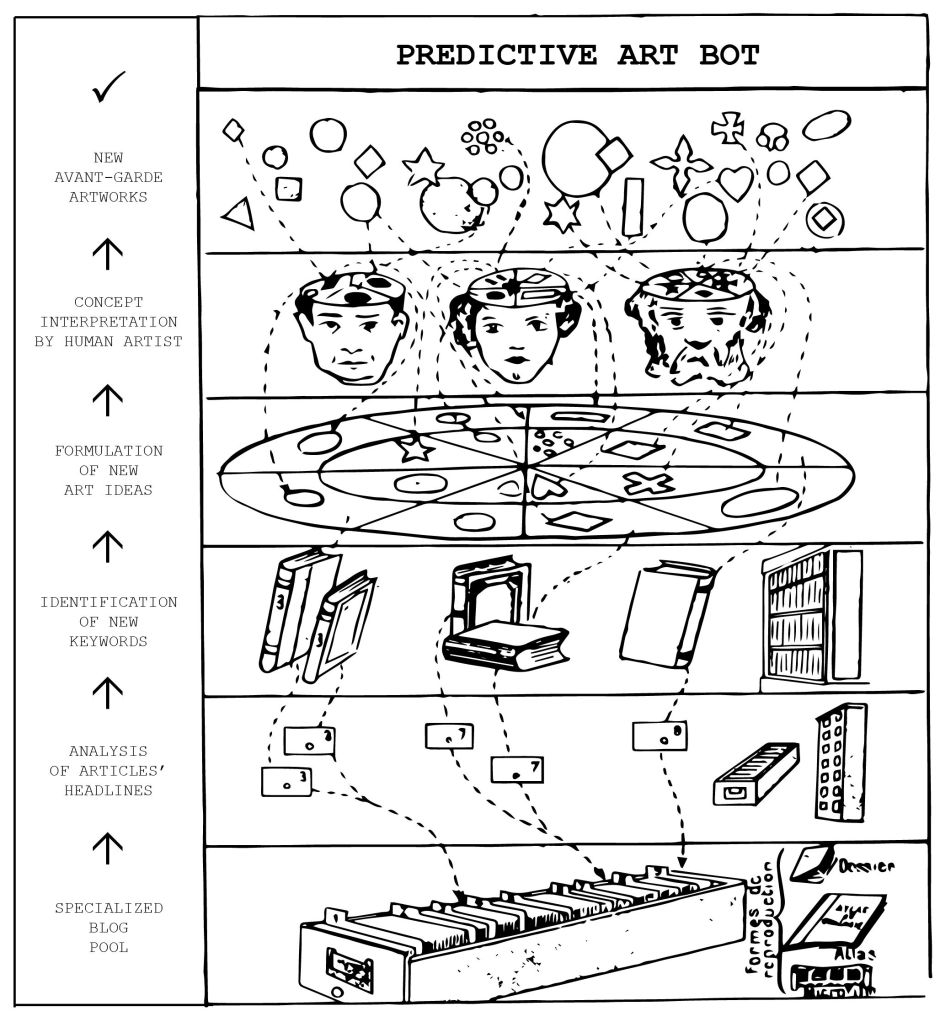 The idea of involving machines into creativity might not be as wild and wacky as it sounds. Among 2017 biggest trend forecasts is “AI as artist.” Composing music, directing movies, creating video games, etc. How long then till robots win a Golden Nica at ars or even the Turner Prize?

I got Maria Roszkowska and Nicolas Maigret to tell me where the project comes from and where they hope it might lead them, the art world and the field of AI.

Hi Maria and Nicolas! How does the artbot work exactly? Does the bot just take its inspiration from the websites you follow and then shake them up into a tweet?

Predictive Art Bot is an algorithm for predicting artistic concepts. It is designed to be both a simplified archetype of the process of exploring artistic ideas and a potentially inspiring, radical and exotic semi-intelligent entity.
This Art Bot is programmed to generate and publish on Twitter new expressions of hypothetical artistic concepts, based on emerging trends in different fields. The areas covered evolve over time. They can engage with fields such as art, activism, economics, medicine, ecology, transhumanism, occultism, and so on.

Based on a collection of keywords from these fields, it triggers a precarious algorithm that publishes on Twitter the proto-concept for an artwork. This concept can become a prophecy… or even a self-fulfilling prophecy, if an artist ends up realizing it. It is precisely the whole issue of the calls for projects which the bot automatically generates, and that invite artists to interpret its nonhuman concepts in exchange for a fee.
(@predartbot) 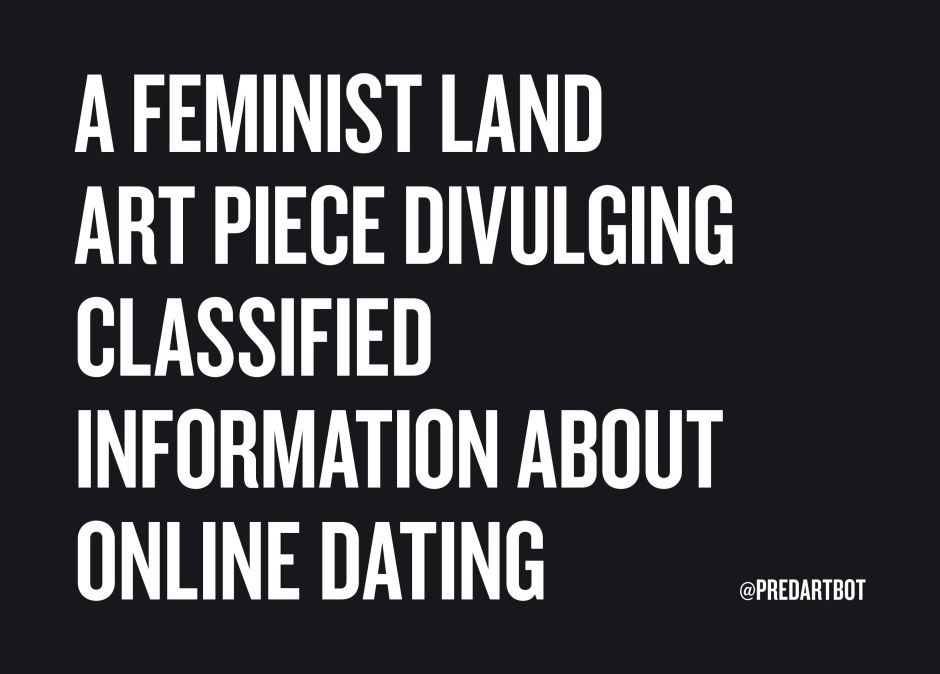 If i understand correctly, the tweets that will be turned into ‘real” projects by artists are the ones that are the most popular on the bot’s twitter page. Don’t you expect twitter followers to want to pervert the system and support only the ones that are the most offensive or impossible? Although the level of interaction is much lower here, you could potentially end up with a monster like the Microsoft AI twitter chatbot…

It would be brilliant if people engaged with this project so much that they’d pervert, sabotage and hijack it. Actually, this Bot totally embraces risk as a core quality of the performative process!

And it is precisely on this subject that the famous Microsoft chatbot TAY was a precious moment. A moment when the biases and mechanics of a programmed system, usually rather inconspicuous, suddenly become visible.

There’s something a bit disturbing about the Predictive Art Bot. It seems to suggest that robots are going to take the one thing that humans are proud of: creativity! They are not only going to ‘steal’ our jobs in the future (including the ‘intellectual’ ones) and do everything far better and faster than us but they might end up being better at making films, artworks, music that will amaze us. Is that something you’d like to comment on?

In art, the production of concepts remains at the very top of the value chain. By operating on this field of thought and inspiration, Predictive Art Bot proposes to push to their limits the ideologies of delegation to the machine and of technological augmentation.

But it is also an attempt to escape the solutionist ideology promoted by the charlatans of AI, who became experts at throwing around science fiction clichés in order to secure R&D budgets.

We need to deconstruct the mythology that surrounds AI because it sometimes verges on the religious, mystical or magical. The reality is quite different: the algorithms have already taken control and they are biased and stupid.

If we look at the services of alleged AIs, we find, for example, contents written by turkers, collages of answers given by other users, or a cluster of possible feedback put together by writers.

This Gizmodo article is great in this context because it shows the process of humans teaching to algorithms, but even further it shows humans doing the micro-tasks that the AI application pretends to do, but actually can’t. Furthermore, in a series of articles published around the same time, we could discover the universe of poets, psychologists and other writers who design responses for alleged AI services.

Predictive Art Bot is a very precarious system, and this is a deliberate and conscious choice. Besides, the first chatbot, Eliza by Joseph Weizenbaum (1966), was a great influence, because of its effectiveness in evoking an intelligence, while there was in fact only a simple program. It was already at the time a strong criticism of the research and ideology that surround artificial intelligence.

“In the distant past, warlords of the Dark Ages ransacked and impoverished what remained of civilization; nowadays, new Datalords behind padded doors are out to rob our past and resell it as our future. ”
— Konrad Becker, “Operation Systems”, dictionary of strategical reality (2009)

On the other hand, Predictive Art Bot takes its cue from and hijack research on the prediction and identification of trends, which is currently booming both in engineering and in marketing, with a profusion of derivative services (e.g. IBM Watson). This bot aims to ape these methods in a very improvised way. It also uses an application, that is both experimental and verging on the absurd, to render these challenges more perceptible.

The concepts of the bot are essentially designed to stimulate the imagination and to trigger desires and interpretation processes. It is precisely in these human interpretations that lie the endless choices that determine the relevance of a realized project. And it is this same process of interpretation that will distinguish a successful human / non-human augmentation :) 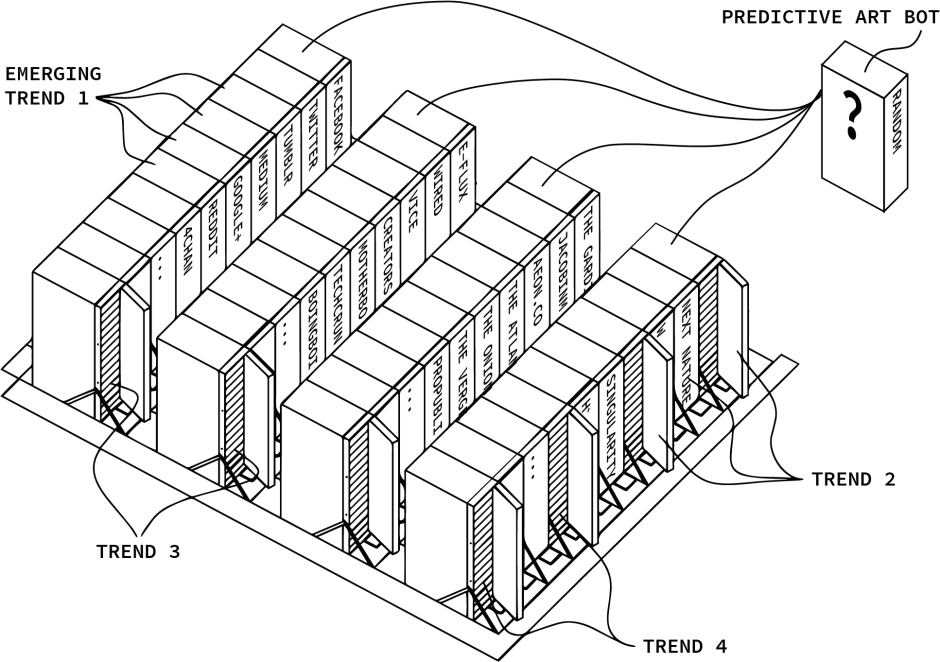 What made you start this research?

Predictive Art Bot is based on the premise that the recipes for the production of artistic ideas (in a given cultural field) tend towards normalization and convergence. These recipes are then extremely close to a program or to primary and predictable organisms. Gilles Deleuze (quoting here Uexküll) illustrates efficiently what the “world” perceived by a simple organism (an entity ready to react to certain types of hyper-limited stimulus, according to a set of automated reflexes) would be like:

Deleuze/Parnet, A is for Animal

Predictive Art Bot proposes to not only reproduce this precarious mechanism of concept production, but also and especially to make it progressively more deviant. 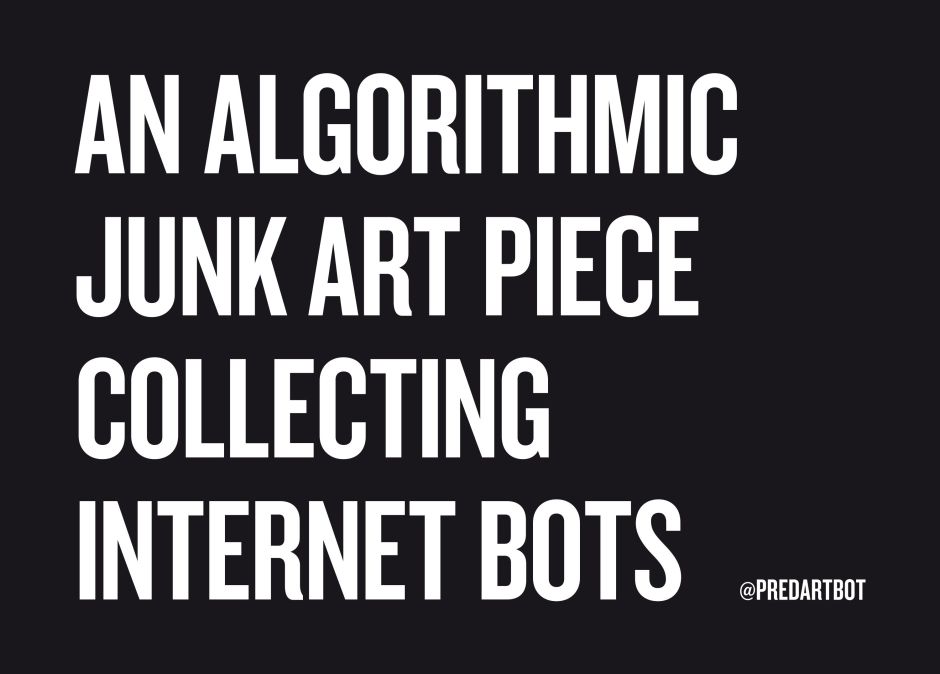 Are you sometimes surprised by what the bot comes up with because i actually thought that some of the tweets do look like the most ‘normal’ media art works, the ones that get awards because they echo what is considered edgy and ‘subversive’ at a certain moment.

The bot proposes angles of approach that are fairly unusual. But in the background, it attempts to exhaust ad absurdio the current rhetorical combinations operating in the artistic field examined, which can be regarded as a caricatural simplification of the brainstorming process.

Beyond that, the bot also presents a potential for prediction and fiction. Every now and then, you get concepts that are almost impossible, and it is precisely this ‘almost’, these overflows, that we’re pursuing. When concepts become unrealistic / impracticable, and trigger a mental exercise akin to conceptual art.
It is somehow a contemporary extension of protocols based on chance and interpretation, which were made popular by the historical avant-gardes: Dada poems, exquisite corpses, magic realism, the instructions for Fluxus events, and even protocols such as