Turbulence.org Commission: Kill Box: an international collaboration between U.S. based artist/activist, Joseph DeLappe and Scotland-based artists and game developers, Malath Abbas, Tom Demajo and Albert Elwin. “Kill Box” is the Military term used to describe an area on a grid map that a mission planner designates a target to be destroyed. Kill Box involves audiences in a fictionalized virtual environment based on documented drone strikes in Northern Pakistan.

Kill Box is an online interactive game that critically explores the nature of drone (UAV) warfare, its complexities and consequences. It is an experience that explores the use of technology to transform and extend political and military power, and the abstraction of killing through virtualization. To “play” the game, download the application to your desktop, and make sure your speakers are on.

Kill Box is a 2015 commission of New Radio and Performing Arts, Inc. for its Turbulence.org website. It was made possible with funds from the National Endowment for the Arts (USA). Additional funding has been provided by The Phoenix Theatre, Leicester, UK; and The Cutting Room, UK.

Joseph DeLappe is an artist/activist with a substantial body of work on the subject of geopolitics and drones and is considered a pioneer in the nascent field of computer games and art. Professor of the Department of Art at the University of Nevada where he directs the Digital Media program. Joseph is lead artist on Kill Box UAV; dealing with concept/content development, theoretical and historical research into drone warfare and primary lead on installation, development of publicity materials and archiving surrounding the project. Working with electronic and new media since 1983, his work in online gaming performance and electromechanical installation have been shown throughout the United States and abroad. In 2006 he began dead-in-iraq, typing consecutively, all names of America’s military casualties from the war in Iraq into the America’s Army first person shooter online recruiting game. DeLappe created and directs the crowdsourced memorial project, iraqimemorial.org.

Malath Abbas is an independent game designer, artist and producer working on experimental and meaningful games. Since co-founding the award winning studio Quartic Llama, Malath is establishing Scotland’s first game collective and co-working space in order to support a community of independent game makers. His current work includes Kill Box, an online game and interactive installation that critically explores the nature of drone warfare, its complexities and consequences.

Tom deMajo is a digital artist, electronic musician and sound designer, and lead designer for project drone. Tom is responsible for unifying the conceptual, experiential, visual and audio aspects of the project, driving the aesthetics and sound in the game. Tom’s work has covered film, animation, games, sound installations and music. He has toured globally as part of electronic music duo Warp Technique, and is a co-founder of Quartic Llama; independent games company. He was designer, sound designer, composer and artist on the award- winning game “other” made with Malath Abbas and in partnership with the National Theatre Scotland. He has collaborated extensively with artists, practitioners and institutions in Scotland and locally such as National Theatre Scotland, Museum of Scotland, Sink, and recently Hot Chocolate and Scottish Dance Theatre. Tom has been regularly invited to contribute to NEoN Digital Arts Festival, and is Artist in Residence at Fleet Collective in Dundee.

Albert Elwin is an artist and programmer, responsible for developing the underlying code for the PD, networking and implementation of all art objects into the project. Originally from New Zealand, Albert now lives and works in Scotland. He studied Computer Games Technology at the University of Abertay Dundee and his career began when he took part in Abertay’s 2012 Dare To Be Digital competition. Albert co-founded Space Budgie, an independent games studio in 2013 where he lead the development of Glitchspace, a visual programming game, well known for its aesthetic and game design. Albert was invited to talk about Glitchspace at various international game festivals, most notably the Game Developer Conference in San Francisco in 2014. For the last 6 months Albert has been working on a wide range of projects and collaborations; developing digital experiments for testing human depth perception at St. Andrews University, an audio/visual digital instrument based on Harmonographs. 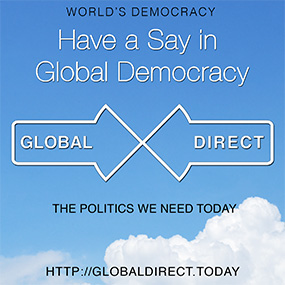 Turbulence.org Commission: Global Direct by Paolo Cirio: Promoting global, participatory democracy Global Direct is a political philosophy driven by information technology and the failure of current political systems to respond to the complexities, crises, and speed of contemporary life. Inspired by the tradition of utopian artistic visions, and informed by extensive research, Cirio’s fifteen organograms illustrate alternative protocols, procedures and policies for actualizing a global democratic system. On the website you will also find an invitation to “Suggest a Slogan,” video statements by prominent advocates of participatory politics, and more. The slogans and printed posters of the Global Direct campaign will be disseminated through social networks and in physical public spaces. Global Direct showcases how distributed networking technologies can be used for participatory decision-making, transparent accountability, and civil awareness.

Global Direct is a 2014 commission of New Radio and Performing Arts, Inc. for its Turbulence.org website. It was made possible with funding from the Jerome Foundation, now celebrating 50 years of the creative spirit of emerging artists. Additionally, Global Direct is supported by DOX Centre for Contemporary Art, Prague, Czech Republic; and Lunatici Cultural A.P.S Association through the Municipality of Parma, Italy.

Paolo Cirio is an Italian contemporary artist based in Manhattan. His projects have tampered with institutions such as Facebook (Face to Facebook, 2011), Amazon (Amazon Noir, 2006), Google (Google Will Eat Itself, 2005), Nato (Anti-Nato Day, 2002), and the financial industry of the Cayman Islands (Loophole For All, 2013). He renders his conceptual works through performances, photos, drawings, videos and installations. Cirio’s work has been presented and exhibited in major art institutions, including Victoria and Albert Museum, London, 2014; TENT, Rotterdam, 2014; Museum of Contemporary Art, Sydney, 2013; ZKM, Karlsruhe, 2013; CCCB, Barcelona, 2013; CCC Strozzina, Florence, 2013; Museum of Contemporary Art of Denver, 2013; MAK, Vienna, 2013; and Architectural Association, London, 2013. Cirio has won a number of awards, most recently a Prix Ars Electronica Golden Nica (2014). He has also curated panel discussions for The Kitchen (2012) and Eyebeam (2013) in New York City.