The Public Practice Studio is a socially-engaged design lab comprised of faculty, students, and alumni at the University of Washington’s Division of Design. Our mission is to bring research and design to bear on pressing issues of local, national, and global concern. We work with academic, industry, and community-based partners on such topics as human trafficking, urban development, and environmental sustainability.

text_ocean is an experiment in random access reading and text visualization, using Herman Melville’s notoriously impenetrable whalefishery epic Moby Dick as source material. Selections of the text are blown apart and become a dynamic sea of words, animated according to grammatical function. The user “reads” the text by ‘hooking’ and releasing words and, in the process, disconnects them from their original lines. Thus Moby Dick is slowly, randomly rewritten by the user, word by word, as she reads.

text_ocean is a 2015 commission of New Radio and Performing Arts, Inc. for its Turbulence.org website. It was made possible with funds from the National Endowment for the Arts.

Zannah Marsh is a Brooklyn-based artist, designer, educator, and programmer with an interest in narrative data and collaborative storytelling. She has taught multimedia art and design at New York University, the New School, and in the City University of New York system. Zannah was a resident researcher at NYU’s Interactive Telecommunications Program, and she’s interned with the Creative Systems Group at Microsoft Research and with Area/Code Games in New York City. She also worked as an exhibit developer at the Museum of Science in Boston, producing internationally-traveling interactive exhibits. She has a MPS from NYU’s Interactive Telecommunications Program (2009), and a BFA from the School of the Museum of Fine Arts in Boston (2000). 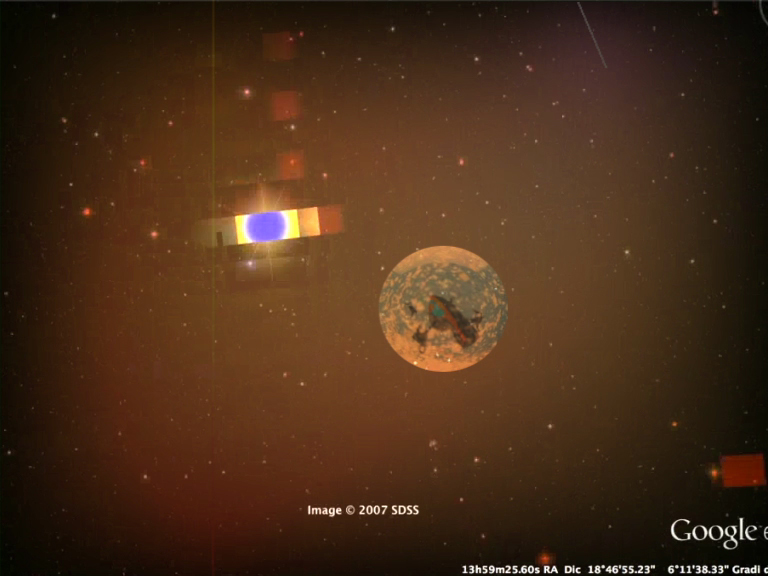 Live Architectures is a series of digital and interactive artworks created over time in a wide-range production developed to reshape the indoor and the outdoor architecture and environmental places as well as the ‘digital environment’, transforming it into something alive and vibrant. This series of site-specific artworks is created and usable exclusively on Google Earth. Through the augmented reality technology, the artwork aims to create an extemporary-temporary virtual land-art, constructing a sort of “mise en abyme” or “droste effect”, in which an element shifts the other in depth, merging the Google earth environment with the augmented area in order to create a new space.

Predicting In Augmented Space invites the viewer to use the Augmented Reality technology on Google Earth browser to discover an oddity atmosphere inhabit ed by some drones trapped into rotating snowglobes crossing the sky area of Google Earth – in the meantime the sun transforming itself by changing face through the emoticons gestures reflecting and communicating the beliefs of some pseudo-indigenous peoples on earth. So, why to map these beliefs using traditional instruments as i.e. the model of the Sloan Digital Sky Survey? Predicting In Augmented Space is an expanded visualization of an imaginary map reflecting conventionalisms!