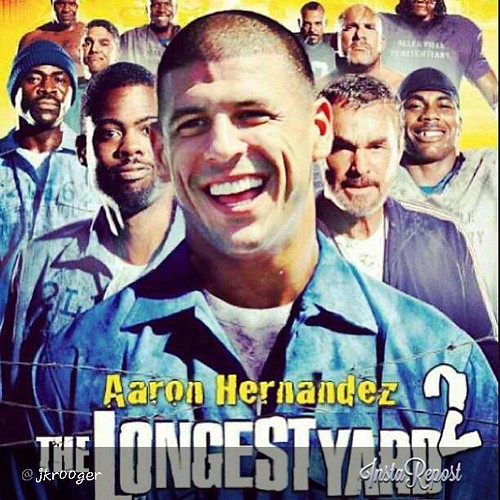 In just a few short weeks the streets of downtown Richmond will become overrun with football fanatics trying to catch a glimpse of their favorite New England Patriot or Washington Redskins footballer. The aroma of rivalry and team spirit will fill the air for fans, players, coaches and staff. The scent of controversy will also permeate with one player noticeably absent from the practice field, a player who has traded in his Patriot’s Uniform for a prison issued jumpsuit and who now smells the confines of a jail cell in place of the sweet aroma of pigskin and turf. This player is Aaron Hernandez and he has become a household name for all of the wrong reasons. He is no longer famous for being the youngest player on any active NFL roster circa 2010 but instead is most notable for the three heinous counts of murder he faces. Aaron Hernandez is the poster boy for all that is wrong in a glorified world of sports and what happens when one attains too much power.
I chose the image above because I think it perfectly encapsulates the plight of Aaron Hernandez and on a broader scale the plight of many professional athletes and famous celebrities. To be a professional athlete or a famous celebrity is to be a member of an elite class and to have access to excessive amounts of power, wealth, culture, and social control. Fans aren’t lining up for hours and possibly days to catch a glimpse of the clerk at Walmart, the middle school teacher, or the everyday business man, they are lining up to see their favorite professional athlete, actor, or musician. This is the culture that we live in, a culture where to be famous is far better than to be normal. Aaron Hernandez is just a micro level example of the ramifications of being too powerful, too young, and under the assumption that rules no longer apply to you.

1 thought on “Too Much Power”