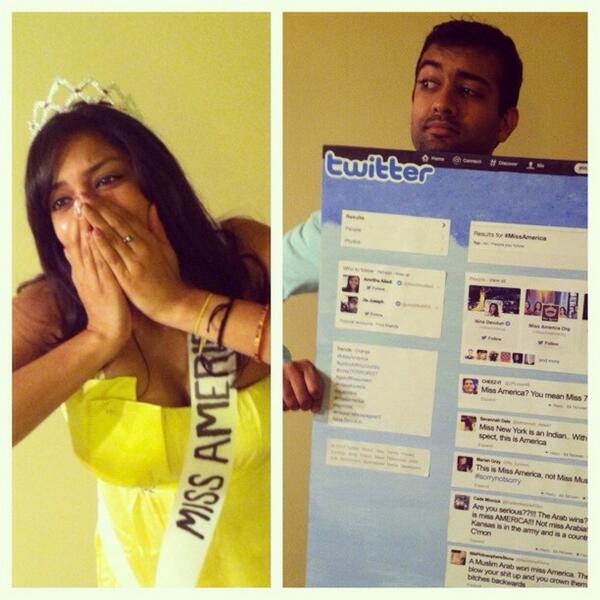 The Girl Next Door

The image above is a Halloween costume created by two kids reflecting the controversy around the first Indian-American being crowned as Miss America. When Nina Davuluri initially won the crown, several individuals went to twitter to voice their displeasure. These individuals called Davuluri “a terrorist” and they couldn’t believe “a Muslim won” even though Davuluri is of Indian origin, Hindu and was born and raised in America.

The next day, Davuluri responded back to these hateful tweets in an interesting way. She believed that Miss American should be reflective of “The Girl Next Door”. However, in today’s society, the perception of the “Girl Next Door” is different than what is was in the past. She believe that “The Girl Next Door” “is evolving as the diversity in America evolves. She’s not who she was 10 years ago, and she’s not going to be the same person come 10 years down the road.” (http://www.npr.org/2013/09/18/223695339/here-she-comes-the-first-indian-american-miss-america).

In today’s society, the United States embraces a more multicultural disposition and because of this, the Miss America competition should be reflective of a “multicultural soceity that accepts, accommodates and even celebrates differences in language, religion, customs, dress, traditions and belief” (Croteau 75). This minor breakthrough for ethnic minorities is reflective of a progress towards a more utopian, multicultural society.