For my analysis, I chose to analyze a local restaurant, Thai Top Ten on VCU campus. Perhaps my main reasoning for wanting to analyze them specifically is due to my cultural background as a south eastern Asian-american and wanting to see how they tried to bring essentially a part of south east Asia to an international audience. I’m also always curious about finding places that can bring that piece of South East Asia with them, being Vietnamese myself I’m always in a sense looking for a piece of home. I always believe that if you attempt to sell yourself as a true, authentic restaurant or place in an area where you’re considered foreign or new, that you should give it your all and really try to bring your culture to the new area.

Immediately, the first thing I came upon as a signifier would be the little cartoon that is not only on their sign but on their menus. With my background I can attest to the idea that they are attempting to play off the aesthetic and color palette found in many south-east Asian illustrations. In a way it tries to bring the natural aesthetic of the region into the urban VCU area, the cutesy tiny illustrations attract anyone that passes by and draws in curiosity. For a comparison, the other Asian restaurants in the area, Good Taste and Lapple also utilize this sort of “oriental” imagery in order to appear as authentic and genuine. The menu also was written in Thai, specifically a romanized Thai way so that we, as the consumers can really feel as if what we’re saying or ordering is that of something someone in Thailand would order as we are uttering the same words as they would. 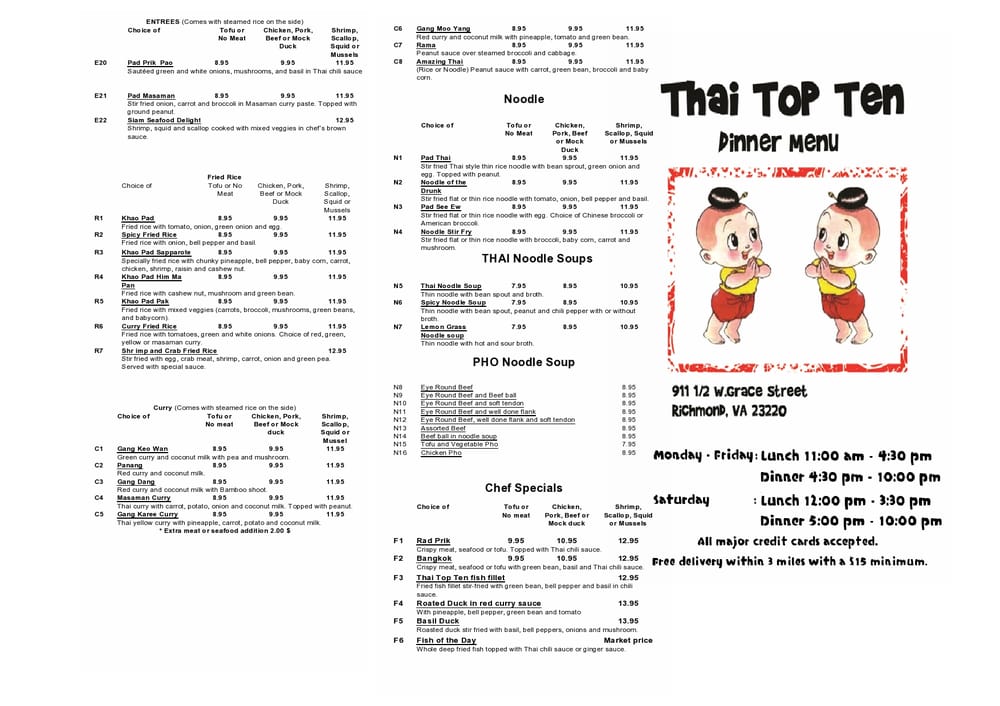 Other signifiers I found interesting were the lights and the dim lighting, as well as the traditional Thai artwork and ornaments hanging around the restaurant. Although naturally we think that these things are chosen just to add a little bit of interest and elegance to the area, it’s also important to understand that authenticity is often a high selling point for many ethnic restaurants in the U.S. We are in an age where we love things found from other places, if we don’t believe the Thai food we consume to be made by Thai people, who bring their culture with them here than ultimately our experience becomes altered in a negative way. What I find interesting about these ornaments found in the restaurant is that they offer a glimpse into what lavishness would be like in Thailand. The highly decorative and shiny details of the elephant rug allow for the consumer to feel almost as if they were in a palace and being treated as Thai royalty, the signifier makes us believe or feel that we are being presented the most delicate and expensive tastes of Thailand, the taste only the higher society would receive.

Other instances that I wasn’t able to document due to not wanting be to rude among to the wait staff were detailed shots of these floral elements hanging on the walls and the wall scrolls with ink paintings or water color paintings, I wasn’t quite sure. However, the point of those specific signifiers is that it’s really super common to find a lot of these kinds of aesthetics in Asian cultures. Floral elements, leafs, trees, all of the bunch refer back to the tropical/jungle like nature of South East Asia, Thailand, Vietnam, Cambodia and Laos in particular. It in a way places the consumer in that respective area. The wall scrolls have become cliche elements, almost a negative signifier in my opinion, it is kind of expected at this point to find Asian restaurants with these hanging around as like a desperate method to really sell that “hey we are indeed authentic, check out these wall scrolls you see in every single Asian film!”

Each of these signifiers serves to amplify one another but they’re all generally in the same group. Each signifier was just a piece in a larger part of Thailand in a sense that they were all these lavish trinkets that could’ve been found in lavish Thai homes, or palaces. The usage of the elephant imagery in the restaurant also tries to establish the fact that the restaurant is truly rooted in it’s cultural heritage because the elephant is the national animal of Thailand and has such strong historic ties to Thailand. The narrative that the restaurant tries to create is that where the consumer is being brought and treated like Thai royalty or at least a high noble in comparison. By making the consumer feel as if they are treated as the royalty, there’s a certain prestige that is felt when eating the restaurant.

The warm atmosphere, warm but dimmed lights also play a roll in trying to make the space feel more intimate and not like a cold box. You are essentially brought into a romanticized atmosphere and are almost primed to begin to enjoy your experience. It is hard not to feel that way, the mood lighting I’ll refer to it as, sets up this feeling of being in a comfortable area even though it may be a totally foreign concept to someone. The interpretations of the signs don’t seem too open to be frank, they present themselves in this one dimensional way and perhaps it’s me not being able to de-construct them any further but I believe that the decorations and signs/signifiers are only to produce a lavish and authentic feeling of Thailand.

By really digging in and breaking down the anatomy essentially of Thai Top Ten it’s kind of interesting what means they use to communicate authenticity. Normally the ideas of an authentic restaurant are based solely upon the food, (which wasn’t too shabby by the way) but the set up of their restaurant I could see luring people in. Me personally, perhaps not because it’s part of my culture and my heritage so I know about these things at first glance, but to someone new, especially someone leaving home to college to be on their own for the first time, it’s understandable to be lured in. It’s almost like a trap in a way, you’re brought in by all of what you see and can’t help but enjoy just being there and thus concluding that Thai Top Ten must be indeed, a true authentic Thai restaurant.