Technologists look for “disruptive technologies” or something that dramatically causes a paradigm shift. For example, smartphones have largely replaced “traditional” cell phones (chart below is older and stops in 2011). Smartphones can be considered “disruptive” because they enabled widespread mobile internet use, social media, and video calls (see second chart below), which was difficult to use or nonexistent for traditional cell phones. 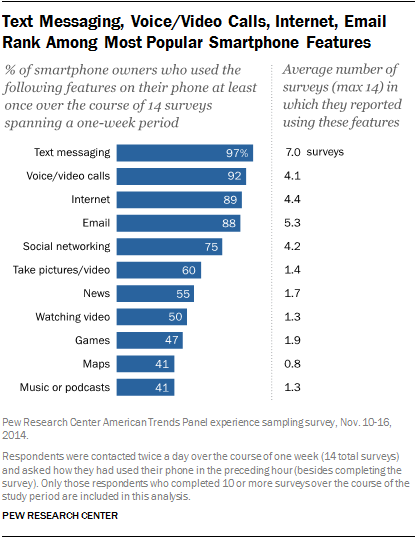 A. Momeni and K. Rost (2015) examined trends to predict potential disruptive technologies in the photovoltaic industry (VCU library proxy link to article). The research question: can patent-development paths, k-core analysis and topic modeling be used to better predict which technologies might become the next disruptive technologies?  Other previous methodologies had significant limitations for forecasting technological change.

The authors collected patent data from the European Patent Office (EPO) World- wide Patent Statistical Database between 1978-2012.  They used a keyword search for “photovoltaic” and “solar cell,” then cleaned up the data by selecting all hits from a certain patent classification. They also collected the extended patent family to consider all possible innovations and their citations. The final dataset had 9,328 patents.

From this data, the authors constructed a network of patents (nodes) and citations (edges). They selected the largest connected subnetwork (5,029 nodes) and then traced a patent development path based on the citation directionality, which resulted in 735 highly cited patents. Next, the authors performed k-core analysis to identify three subnetworks in the remaining nodes that corresponded with three different technological developments: thin-film, organic, and crystalline silicon (see below). Also, they analyzed the networks based on subset of years and found trends in the convergence of technologies. The authors used the results to predict change in the industry for on the most rapidly growing technology based on the most highly cited patents. They also identified “hidden” technologies within each subnetwork that might become the disruptive technology.

While the paper presented a positive outcome, the authors did warn of several limitations. For example, their analysis depended on inventors seeking patents to be included in the sample. They also suggested that their method needs to be applied to other industries for testing.

Leave a Reply to Jennifer A. Johnson Cancel reply