While social network analysis has been useful in examining complex relationships between large institutions (such as universities) or ideas (such as predicting disruptive technologies), this week’s discussion focuses on more personal matters. In Connected, Christakis argued our social networks influenced happiness or weight. Lois (2016) identified four types of egocentric networks through cluster analysis to predict when couples became parents. From prior research, the four factors supporting the influence of social networks on fertility include: 1) social pressure, 2) social support, 3) emotional contagion, and 4) social learning. His research question is whether his four types of networks identified through have predictive validity.

Lois examined six years of data (in waves) from a sample spanning three birth cohorts, narrowed down to 3,104 respondents between ages 20-42 that initially had no children from the German Family Panel Study dataset. Out of this sample, 332 respondents (the egocentric nodes in the networks) became pregnant or had children. Each of these individuals responded to questions to generate names about their social network (other nodes) and then interpret their relationships (forming edges in the network).

He found four types of clusters within the network: family-remote (small, homogenous friend network), polarized (large, heterogeneous friends and family network), disintegrated (small network without many connections), and family-centered (strong connections with family). The results show the most significance in social mechanisms (the four factors supporting the influence of social networks mentioned earlier) between the family-remote and family-centered types. However, the author notes a significant limitation as the effect (having children) may be caused by other factors (such as age) than networks. Social network analysis helped reinforce the idea that our network can influence life choices, particularly in the area of starting a family.

In addition, I also would argue that this study applies the most to Germans. For example, the following chart shows the percentages of household types: 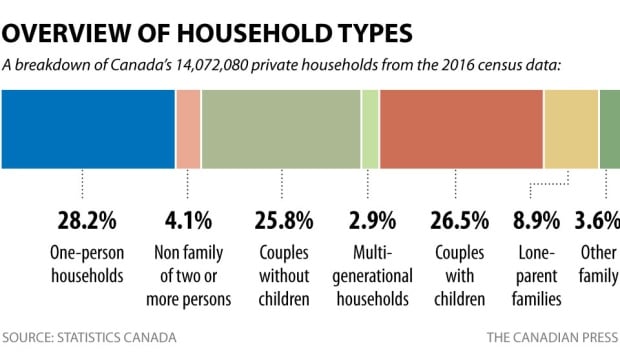 The differences may be statistically significant and cause different kinds of clusters to be seen in networks that likely would affect the analysis using information from another country.

In contrast, I chose to look at an second article on the other end of the spectrum. Burholt and Dobbs (2014) studied the support networks for elderly individuals in multigenerational/extended households to identify network typologies. The authors believed that the presence of other family might skew researchers’ ability to using network typologies to estimate levels of wellbeing in elderly individuals, so they wanted to identify if these multigenerational/extended households resulted in different types of networks as their primary research question. Their secondary question asked whether these typologies had the ability to predict outcomes (wellbeing or loneliness/isolation).

The authors collected a total sample of 590 older individuals (half male/half female) from the Families and Migration: Older People from South Asia project. This project had collected data using eight questions to support classification by the Wenger Support Network Typology: local family-dependent network, locally integrated network (local family and community involvement), local self-contained network (household centered), wider community-focused network (no local family and more community involvement), and private restricted network (no local family and few other connections). The elderly individual’s family and friends became the nodes with the various supportive relationships (from selected questions about chatting or helping with laundry) as the links.

Using cluster analysis, the authors selected a four cluster result as the most clear and interpretable: 28% multigenerational households: older integrated networks, 27% multigenerational households: younger family networks (largest type of household and more family-focused), ~27% family and friends integrated networks, and 18% restricted non-kin networks. When the authors compared the Wenger types with their new types, they found that significantly more individuals fell within their “restricted non-kin networks” (18%) than the private restricted network (4%). As a result, they concluded that their new typologies better identified individuals who might receive formal services because they lack other forms of support. Social network analysis helped identify a larger vulnerable population than expected because the restricted non-kin networks might decline family assistance and be more willing to pay for outside services.

One thought on “Social network analysis for family”