I think, for my small scale social network analysis paper, I will be using my dataset from the StudentLoans subreddit (link this). In their content analysis of a peer support forum for consumer debtors, Stanley, Deville & Montgomerie (2016)⁠ argue that sharing information about their debts, within the context of a culture that increasingly associates financial wellbeing with morality, constitutes a source of resistance to creditors. Within their content analysis, Stanley, Deville & Montgomerie (2016)⁠ identified two primary types of posts in these peer support forums: troubleshooting posts, where individuals were looking for technical assistance with their debts, and journeying posts, where debtors seek emotional support. I’ve selected the StudentLoans subreddit because, based off my observations of the various subreddits related to student debt, I anticipate that the StudentLoans subreddit will be more inclined to troubleshooting-type posts, which will help my project stay in conversation with Stanley, Deville & Montgomerie (2016)⁠.

Part of this project is a small-scale content analysis, ideally into a binary category that can be depicted as edge attributes on a social network analysis graph. I’m anticipating that I will probably categorize posts into the categories of “troubleshooting” and “political discussion,” but if I feel that the sampled threads are better represented with different categories, then I do will so. Primarily, I’m interested in the capacity of online peer support as a form of resistance against financial debt, so my research questions will be as follows: 1) what is the structure of the social network formed by interactions in the StudentLoans subreddit?, 2) do prominent members of the community favor discussion in one kind of post over the other?, and, 3) do newcomers to the community favor discussion in one kind of post over the other? Essentially, if these peer support forums are instruments of resistance, I’m interested in testing their resilience – do posters get burnt out telling individuals when they should consolidate their loans and when they should challenge something, or maybe it’s just all held together by a core group of highly motivated individuals?

Methodologically, I will be utilizing Reddit data which I gathered via the Reddit API – I’ve written up the process here (link this). I might actually pull this data again now that I’m more comfortable working with json files, because I think there are some data fields available that my script didn’t pull, but I doubt that will change my methodology for this paper significantly. I’m not aware of too many explicitly sociological papers using Reddit data, although I’ve definitely seem some that use it as a component of a broader social media analysis, although one study that does utilize a similar methodology for data collection is Kilgo, Yoo, Sinta, Geise, and Suran’s (2016)⁠ “Led it on Reddit,” which investigates opinion leadership on Reddit. Similarly, they also pull data from the Reddit API, and while they don’t employ social network analysis, I think that they might have really benefited from it as much of their analysis centers around popularity. Regardless, I think that my data collection and analysis will be effective without relying on a model, since I already tested some of it out on a previous practicum for this class – more pressing is if my methodology will be effective for answering my research questions. Similarly, I’m sitting on the fence on how I should define edges in my social network. On the aforementioned practicum, I considered “thread interaction,” or being present within the same thread (which seems reasonable, as this is the level at which information is transferred), which I think I’ll probably do again. I could definitely use “direct replies” as a form of edges too, as Reddit employs nested comments where users can directly reply to each other, and while this design feels like it offers some more precision, I’m not sure how that precision would help with my specific research questions (see how these nested comments look in a typical Reddit thread below). 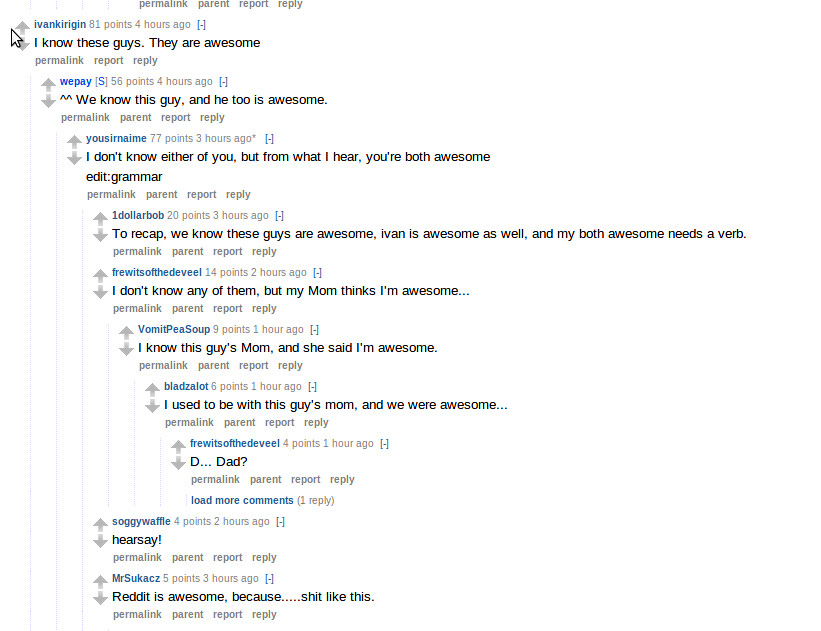