When i think of video games this topic of gender never really came to mind at first. As I played games I would see people talk about the violence of the game but they never really talked about how the gender roles of the characters. Nowadays it seems that when people make a game and need to make a poster or something to put up on their website it seems to follow the same thing every time. The women are portrayed to be very busty with little clothing while the men tend to look heroic with full armor and big muscles. Also when creating these pictures they tend to want to use a female more often then a male to catch the eyes of their target audience. If i were to explore this topic i would look into what differences and what emphasis they put on characters of different genders as well as how gamers and non-gamers respond to these pictures. I would ask why the developers would not try to break the mold and create something new to try to get publicity for their games. Memes are a constantly growing trend which anyone on the internet can create and post. These memes can include anything from pictures to gifs and anything in between. With their rapid growth and popularity its not wonder that people have taken such a liking to them. With the combination of pictures and words they can express emotion better then using words alone. As such I would like to find out if they can express emotions clearer then just using words when talking with someone on the internet. I would ask questions such as what memes people tend to prefer and if any meme offends them or a group of people and why they feel that way. I would want to know if people could understand these memes and not need to know the language of the person who posted it and still be able to understand what they meant. 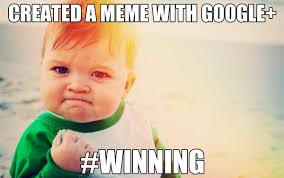