The following are some questions and response to the documentary Fear and Learning at Hoover Elementary.

While the documentary elicited a range of different emotions, I found that the most overwhelming were shock, sympathy, and a sense of weary hope. It is absolutely appalling to see that people, especially children, of any background are and have been treated in such poor ways in the United States. Even more so, it is sad to see that such views of intolerance and a lack of sympathy or human empathy gets translated into some teaching  and law making , with 187, as well. But even despite all of that, there are still individuals and teachers who believe different. They believe in working with everyone, and they aim to help and teach those who really need it so that they can be the best that that can. Things still need to change. There is still so much that needs to be accomplished to help create a better tomorrow for everyone, but if I can do anything to help enforce that change or encourage it with my own students, one day, I hope to do my best to fulfill that.

2.  How will you reach all of your students?  Do you think art integration can play a role in bridging different socio-economic divides in the classroom?

First and foremost, I simply hope to be able to talk to my students about issues like the documentary covered. I would like to work towards open communication and a sense of family within my classroom where my students feel as those they really can trust and accept each other not matter who has what features or backgrounds. And as such, I do believe that art integration can play a role in helping to achieve these goals and help bridge gaps between students and socio-economic classes. I feel as though art is a great medium to connect students to any subject and issues like this are no different. Having students bring their own unique ideas on art or even bringing in art from all different classes of life into a classroom can really help students to better broaden their perspectives and understand the world around them better.

3. Was there anything shocking about this documentary to you?

There were several shocking things from the documentary. For one, it was just flat out appalling to learn that actual laws create such terrible living conditions for anyone, for any reason, in the United States. Aside from that, it was shocking to learn that some of the most bias, accepting viewpoints came from one of the teachers at the school. And finally, learning that members of the community being oppressed voted and supported the bills and laws that are oppressing them was shocking as well, though it could most definitely be argued that perhaps they did not have a full understanding of what they were supporting.

4. Find a multimedia item/image which relates to the content of the film, or the experiences of the students of the film to share and post on your blog after you answer the previous questions. 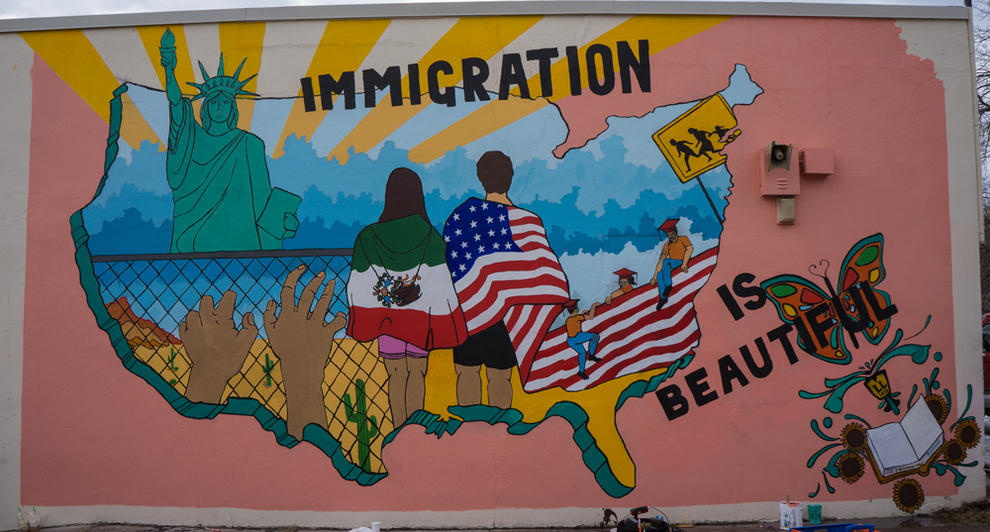 5. After you have posted your multimedia item/image, reflect on why you chose that image to share, and why it furthers the conversation of immigration in America.

I think this mural, while perhaps a bit on the nose for older students and people, is a great starting point or conversation piece to use in an elementary school classroom to use to introduce the concepts of immigration and diversity. With it, students gain a visual that is not too brutal, but still shows the hardships that immigrants, particularly Latinos, face while still enforcing the idea that having these people in a the United States is a good thing. It offers many different details that students can pick out and discuss the meaning behind, as well as words that students can consider and decide why the artist incorporated them. All in all, it simply works to help give students a visual starting point for a topic that may otherwise be very strange or unknown to them.

This week’s chapter in the book focused on integrating the arts into mathematics in the classroom, and our task was to find one piece of art, of any medium, that could be used to teach a math concept in class. I chose to use one of M.C. Escher’s paintings. This piece, a picture of fish, two different colored fish, ordered together in one large, repeating pattern, could be used to help teach several concepts in mathematics to elementary school students. For younger students in grades K-3, it could be used to help students understand the idea of patterns. With a visual like this, they could see how patterns are formed not only with colors, but with shapes as well and that some patterns may have a combination of various different aspects that all come together to make it a cohesive piece. For older students in grades 4-6, this piece could be used to talk about tessellations, which is basically using shapes repeatedly to create a pattern without any gaps. They could use this picture as a starting point to talk about tessellations and what the concept entails with a more relateable approach than simply throwing shapes mashed together at them. Everyone can see the fish and may be able to more easily recognize it is in a pattern thanks to its details than normal shapes would allow for. This Escher piece, and many of his other works, can be used in a variety of different mathematical concepts, these were just a two that really stood out to me.