Gerardo is a 5 year old boy with autism, auditory sensitivity, and motor planning deficits. He is an excellent reader and particularly chooses to read books about animals, though he doesn’t have a favorite. He engages largely through unrelated scripting. Despite his first language being Spanish, the scripts are all in English and from popular shows like Bubble Guppies. He responds to his name and typically does well following instructions but may not always verbally respond to questions (ex. Do you have to go to the bathroom? – gets up and goes) and will respond to English or Spanish.

He has been with his current teacher Betsy for two years now, and in that time he has been potty-trained. They have discovered that noise cancelling headphones are too much pressure for him, so he wears regular headphones from Five Below with cut cords to muffle sound. He is unable to intentionally cross midline (ex. Unable to make X with arms if told but crosses during the ABC song) and could not crawl during a class activity due to poor motor planning and coordination. He is overall not a very active child, likely in part due to these motor deficits.

Automatic toilets are over-stimulating and panic-inducing for Gerardo. Betsy has tried modeling and desensitization, but these tactics were unsuccessful. He is now able to push the button by himself without panicking and does not panic when another student is using the restroom and it flushes. He has very good bladder control and he sits to use the restroom. Gerardo has lately been ‘chilling’ in the bathroom, either not really doing anything or sitting on the toilet reading (pants down).

Gerardo will soon be going to kindergarten and the automatic toilets will be in stalls. He’ll spend parts of his day with a general education class and instructional time in a special education classroom. Currently, Gerardo is moderately responsible for his own belongings (hanging up his coat, putting away his folder, etc.) but may benefit from a teacher having a copy of important items.

Gerardo is a four year old student who has difficulty utilizing the toilets at school because he is overstimulated by the auditory stimulus produced by the automatic flushing toilet.

How might we help Gerardo use the toilet independently at school once he advances to kindergarten? 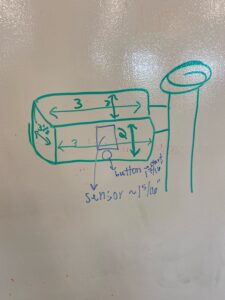 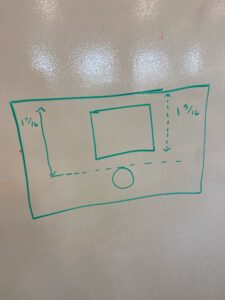 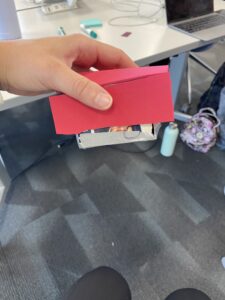 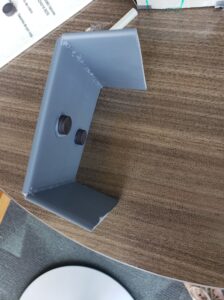 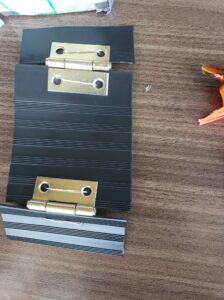 The above pictures are our initial prototypes. Instructor feedback included not using wire to attach hinges as it is not durable enough, and instead use closed nut bolts to attach hinges. Additionally, the vinyl material (black) would not be very durable on its own, and instead of layering the vinyl, we were instructed to use the floorboard (grey material) as it is more durable and still flexible. Feedback advised not to use glue if possible since it will eventually deteriorate and we want a long-lasting solution for Gerardo.

We visited the school to test the product. For accuracy, we took measurements of the sensor and confirmed that the design would not trigger a flush when placed or when moving in the stall.  She noted that she liked the portable and simple design and thought it would work well for Gerardo’s needs. Client feedback emphasized the importance of a visual teaching aide to help Gerardo learn how to use the product. She noted that making a duplicate for him to also have at home would be very beneficial in learning how to use it and integrating it into his bathroom routine.

As part of revisions, we purchased smaller hinges and additional screws/bolts in order to make the design more sturdy. We re-cut the floorboard to match new measurements and to fine tune the design. 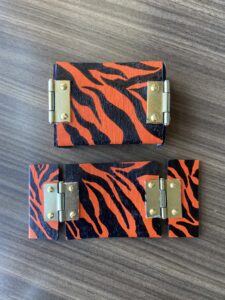 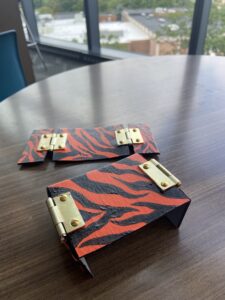 Our final design is a combination of our two prototypes. We considered baseboard and vinyl material, and chose the baseboard material because it is flexible, durable, and easy to clean. Hygiene was a very important factor in this project because it will be used in public bathrooms.

To create the hanging effect to cover the sensor, we considered using hot glue, thermoplastic, and hinges. We also needed to make sure the design was portable, compact, and completely able to cover the sensor. Ultimately, we decided to use hinges because they are durable and unlikely to break off, unlike glue which weakens with time. We also had to decide how to attach the hinges; we considered screws or sewing it to the material with thread/wire. The vinyl prototype used wires to attach the hinges to the vinyl, but we had some concerns about safety and durability. We found that the combination of screws, washers, and nuts provided no sharp or pointed edges as well as security for the hinges, so we implemented these into the final design. We decorated our final design with acrylic paint and sharpie to mimic a tiger print. Gerardo enjoys animals and the school’s mascot is a tiger, so we decided to incorporate a creative aspect to our Bathroom Pass.

The material cost was $13.30 for the final product. The breakdown of the cost of materials is included in a spreadsheet below.

Our design has many strengths. It is durable, portable, and efficient. It has been tested in multiple bathrooms and, most importantly, is successful in mediating the automatic flush. The baseboard material is durable and easy to clean. It’s also customizable! It takes virtually no time to set up and is very simple and straightforward. It doesn’t take more than 20 minutes to manufacture once all the materials are gathered and doesn’t require any previous knowledge or experience. The materials are inexpensive and easily available in hardware stores.

Potential weaknesses for our final product include that it may be knocked off the toilet sensor because it is not directly attachable. Because the product has to be portable and the sensor on the toilet lacks strong magnetism, we were unable to implement an adhesive element to the product. This could potentially be improved by adding a Velcro hook to the product and a Velcro loop to the metal attachment if Gerardo consistently uses one bathroom, such as the en-suite bathroom for his current classroom. The hinges may make the product a little heavier than would be ideal, but in theory this could be solved by using smaller hinges; we didn’t do this because we couldn’t find complementary attachment materials. Another possible weakness would be that the screws may loosen over time, but this is easily fixed by routine maintenance.