Aric is a college graduate who majored in Religious Studies. Aric works for a Baseball Team as the assistant director of program distribution. He likes to be outside, play video games, and watch baseball. He values being independent and spending time with his family. Aric has high tone from his cerebral palsy, has limited forearm supination and pronation, and has limited grip strength and range. Aric is seeking services from an occupational therapist to receive help in independently feeding himself with a spoon. Previously he has tried various types of spoons, manual support at the elbow, and wearing DMOs. During an interview with Aric, Aric verbalized his excitement in finding a spoon that will increase his independence in self-feeding with a spoon.

Aric reports that he has tried a number of different types of spoons, but he has not found one that has been sufficient. He is able to eat with an inverted fork (i.e. spikes of fork face down) and utilize a straw to drink (wraps his tongue around the straw), but the shape of the spoon is not meeting his needs to independently eat. He has tried many spoons with different neck angles. The medium angle seems to be the most effective for him; with this design, however, he tends to spill the contents on his spoon as he brings the spoon to his mouth. When bringing the food to his mouth, the face of the spoon moves from a parallel position holding food flat to a perpendicular position causing the food to fall off. Aric has difficulty abducting his shoulder and bending his wrist, so a spoon that accommodates decreased elbow flexion is ideal. Aric has no trouble with grip expressing a pronated cylindrical grip on a built-up handle. When being spoon-fed, Aric does not have trouble eating or swallowing. When self-feeding with a spoon, he gags and cannot complete eating. This may be due to him hitting his teeth or gums with the spoon. Aric also cannot close his lips, so his mouth remains open while chewing. Other sensory considerations, like texture and temperature, may prevent him from self-feeding.

User need statement: Aric is a 24-year-old college graduate who has a hard time eating independently, because he can’t keep food on his spoon.

POV Question: How might we help Aric succeed in eating independently with a spoon?

Initial brainstorming round in Jamboard: 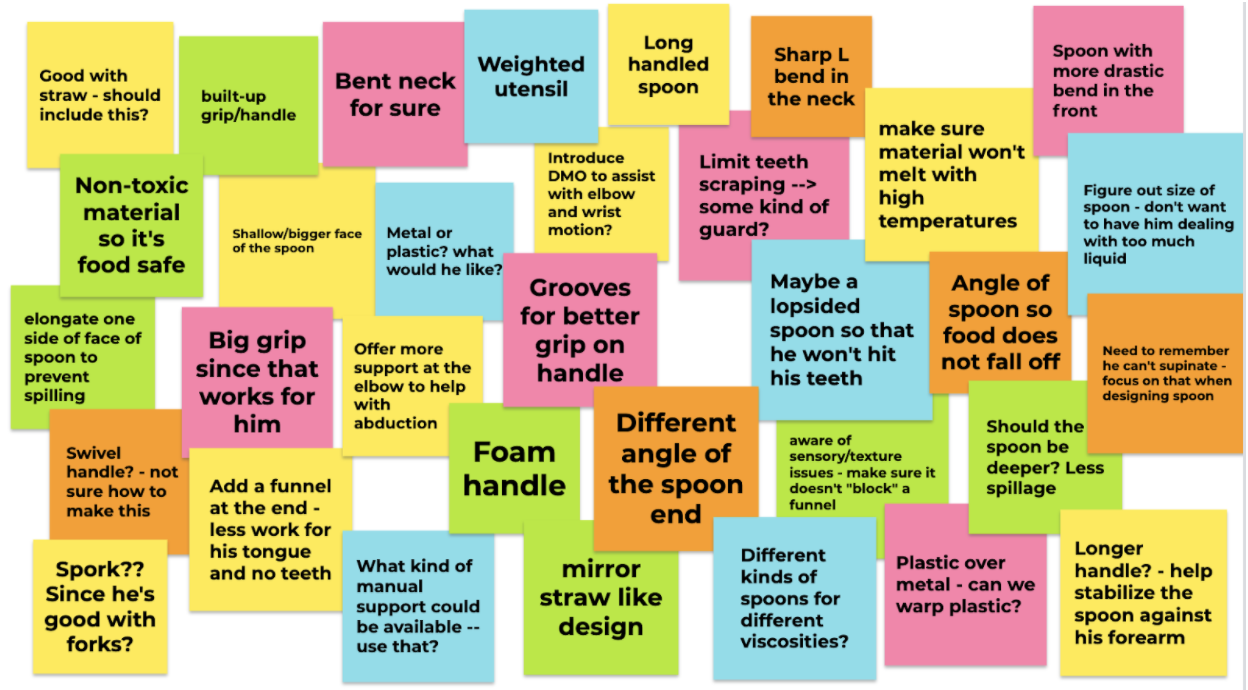 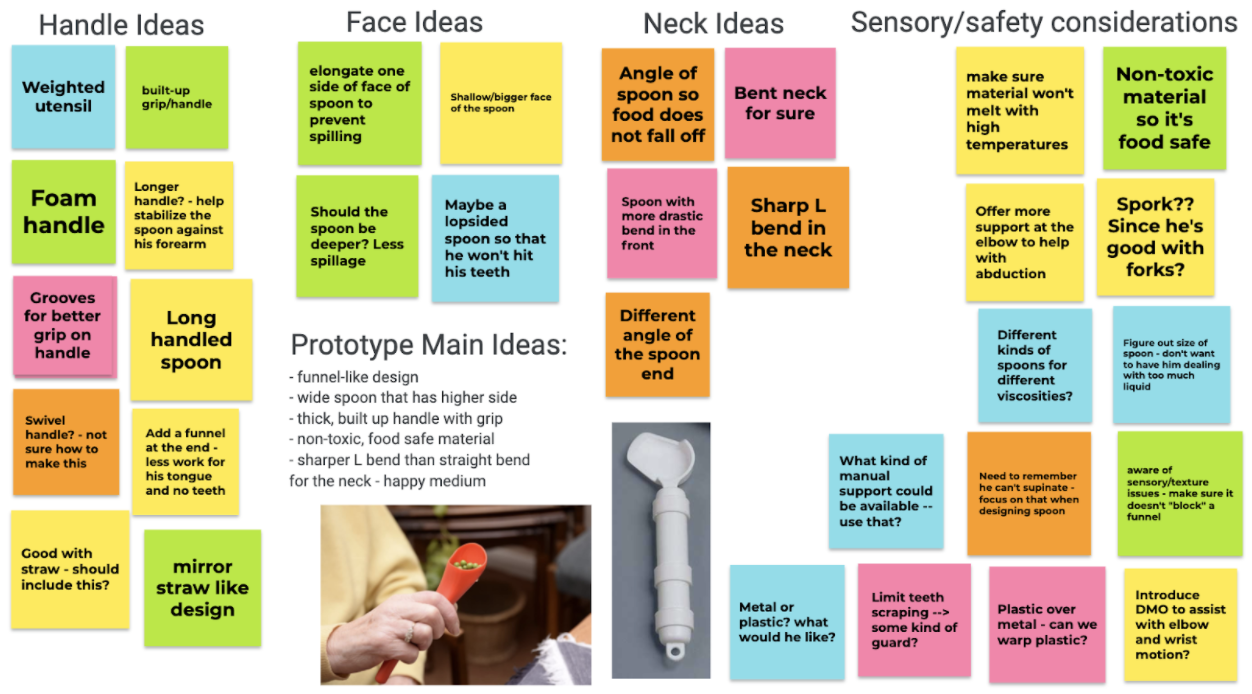 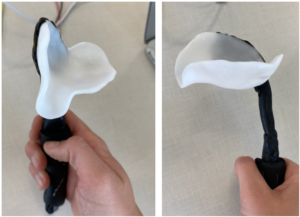 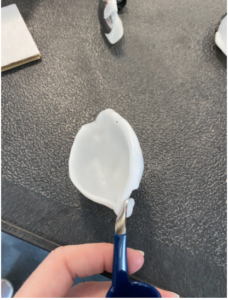 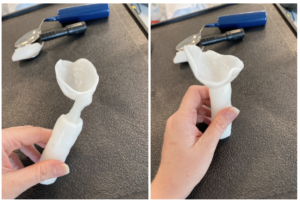 Feedback from Aric (client) and his OT:

We decided to combine parts of prototypes #1 and #2 based on Aric’s preferences.

We created a similar design with a smaller handle and bowl (#4). Given Aric’s feedback about this prototype, we no longer considered this design. Secondly, instructor liked our clip-on designs (#2 and #3), but thought #2 would be the most successful for the larger bowl of the spoon Aric is accustomed to using.

We had a few ideas for what materials to use to build up a cushioned spoon handle, such as a wooden dowel or strictly isomorph. After collaborating with our instructor to discuss these options, she felt that having a light weight, solid material would be comfortable and aesthetically pleasing. Our original plan was to cut the spoon at the neck of the spoon and wedge it in a wooden dowel. However, our instructor advised against cutting metal due to the difficulty and stressed the importance of maintaining the original spoon handle. She helped us think about other alternatives. Our instructors suggested that we either split the wooden dowel and sandwich the handle of the spoon between the two halves, or route a thin piece of wood into a similar shape to the wooden dowel and use that as the base of the handle. 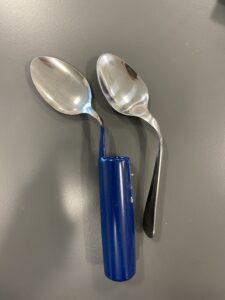 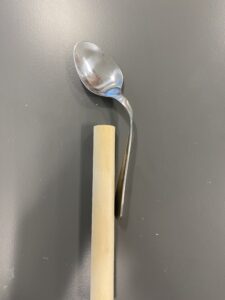 Given the feedback from our instructors about what material to use around the handle of the spoon, we decided to use a hand saw to split the wooden dowel in half longways. During this process, she provided us helpful suggestions and feedback on where to saw and how to appropriately clamp curved wood. Then, after splitting the wood entirely and positioning the spoon between the two halves, we noticed that the handle may be longer than needed. After consulting with our instructor, she agreed that we had excess wood and suggested we cut off about 1 inch of wood to shorten the handle. Additionally, our instructor suggested we add foam material between the pieces to fill gaps in our handle. After using hot glue to attach the foam and spoon to the wooden dowel, our instructor straightened the wooden pieces to create a uniform cylindrical handle.

Finally, we discussed what we wanted to wrap around the wooden handle to create a cushion around the grip for Aric. Initially we considered two different textured pipe insulation tubing. When asking our instructor about these materials, she agreed that using pipe insulation was appropriate and she asked us to consider what material would best support Aric’s grip. When we proposed our idea to secure the pipe insulation with velcro to allow Aric to remove the insulation for cleaning, our instructor agreed that it would be best to position the velcro on areas of the handle that would not come into contact with his hand, to prevent skin irritation. She also suggested that we shave down the side of the insulation at the top of the handle to create more clearance for food while scooping. 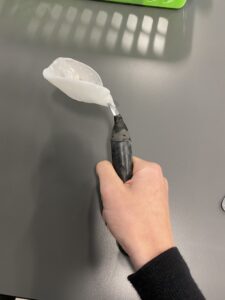 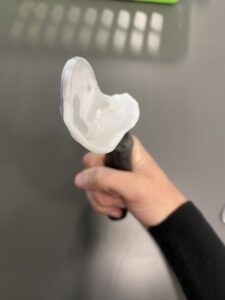 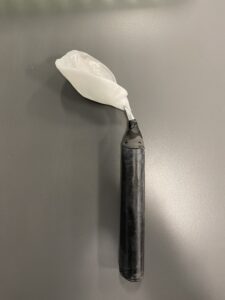 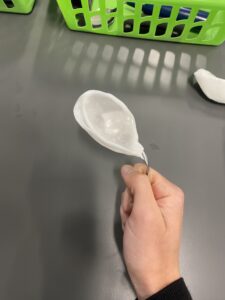 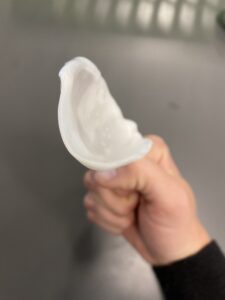 Portable clip-on adapted bowl. This clip-on can be placed on any spoon that Aric owns.

Handle: Given Aric’s feedback that he preferred the handle on prototype #1, we wanted to make a handle that was the same diameter, length, and cushion, but was neater. To make prototype #1, we used thermoplastic to create a cylindrical handle ourselves, but this made for an asymmetrical handle. Therefore, we wanted to find a way to make a handle that would be a more uniform and symmetrical handle. We decided to use a wooden dowel as our base to wrap thermoplastic around, which would allow us to roll a smoother cylindrical handle. The wooden dowel will be cut in half longways so the handle of the spoon can be sandwiched between the two halves using hot glue and the handle will then be circular. Wrapping the wooden dowel in thermoplastic will also create a tight seal so water and food can not get into the handle and the handle can be washed with soap and water.

Once the thermoplastic has been wrapped around the wooden dowel and smoothed out, we will then add pipe insulation to create a cushioned and padded handle for comfort. We will use insulation with ⅛” thickness to prevent the handle from becoming too big and bulky. We plan to design the insulation so it can be removed from the handle when the spoon needs to be cleaned. We first thought we would attach the insulation using velcro, but due to concerns regarding skin irritation we decided to use pipe insulation tape instead. The pipe insulation tape will be wrapped around a piece of paper that has been fully sealed with packing tape to create a cylindrical grip that can be slid on and off the handle. This will allow for easy cleaning.

Spoon neck bend: Given the information we received from Aric and his mom in the initial Zoom meeting and the feedback received after our initial prototypes, we wanted to make a spoon handle that had a bend in the neck to angle towards Aric’s mouth. To make prototype #1, we used thermoplastic that we molded to create the bend, however this was messy and bulky. For our final product, we wanted the spoon to look more clean and uniform so we decided to buy a spoon that we could manually bend to the angle that we wanted. We plan to purchase a thin metal spoon that can be bent using pliers.

Our plan is to mold a modified spoon bowl onto the metal bowl of the spoon that we bent and on which we built up the handle. This will create a spoon that meets Aric’s needs on the handle, the neck bend of the spoon, and the bowl of the spoon. However, we wanted to also create a modified spoon bowl that could be clipped on and off of any medium-size spoon that Aric owns. With this clip-on bowl, we will create the same features (i.e. U-shaped, high lip, smooth, funnel-like end, etc.) with the addition of a top and a bottom lip on the back of the bowl to allow a metal spoon to be clipped into this bowl attachment. The InstaMorph will be molded so the top and bottom lips will keep the bowl on the metal spoon without falling off during use.