Hal is a man in his 60s, who served many years in the National Guard before entering a ministry career as a pastor. He is now retired and lives at home with his wife, and his dog. He enjoys singing, watching old western movies, and maintaining a climate of truth in this time of political division.

Many factors contribute to a lack of body movement due to discomfort. His range of motion at the hips is limited. Hal sustained a fall about two and a half years ago, causing him to rupture capillaries in his left knee. He also stated he has had arthritis in his right knee for about 10-15 years, describing it as “bone on bone” pain. Hal’s main concern is the arthritis in his pelvis and lower back that causes difficulty bending over to don and doff his socks.

Currently, his means for putting on his compression socks is with the help of his wife who does this task for him. He told us that he swings his leg up onto hers, while sitting on the couch, and she will put his socks on up to his ankle. At this point, he will need to pull his socks up to his knees, which can take significant bending and pulling; he also reported that his wife does not have as much hand strength as she used to. To take them off, he sits on the toilet seat and flexes his knee backwards so that it’s under his hip. In that position, he will lean and bend to take the socks off.

Hal was kind enough to show us the equipment he currently uses to compensate for the difficulty of bending over for various tasks. He uses grill tongs as a “reacher” and to grab onto his socks to pull them up. Hal does own a shoe horn and uses that frequently to don and doff his shoes. As for a sock aid, Hal uses a shovel-like sock aid that he ordered from Amazon. This sock aid does not have rope/handles on the side to prevent bending, and Hal described it as causing more “frustration than benefit”.

User Need Statement: Hal is a retired pastor who has difficulty donning and doffing his socks due to inflexibility in his pelvis and lower back regions.

POV Question: How might we help Hal don and doff his socks? 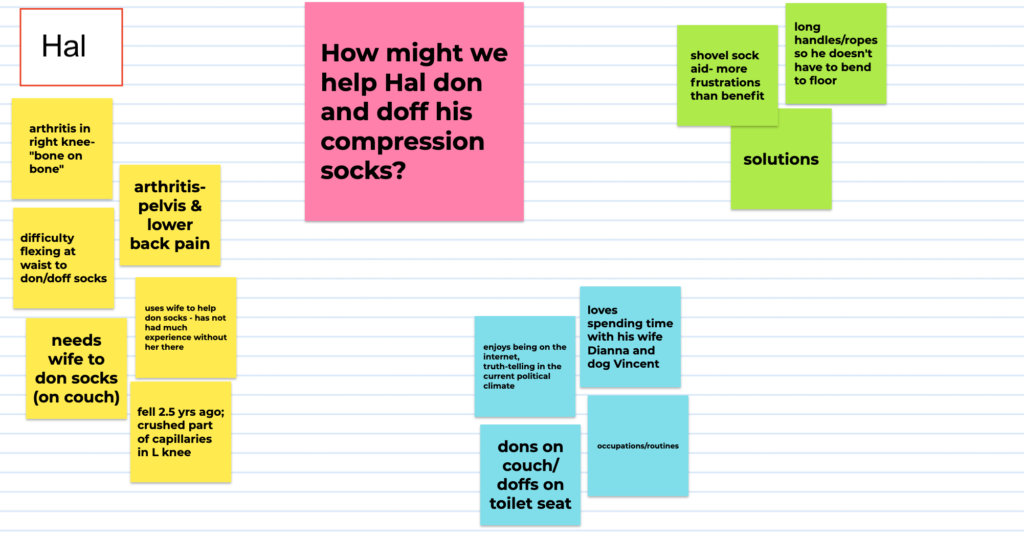 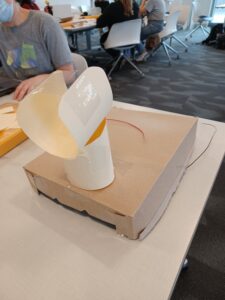 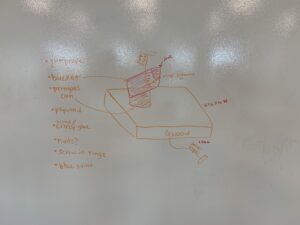 Instructors reviewed our initial prototype P1 (see pictures above). She said that our P1 is similar to a normal sock aid and suggested we consider either customizing a sock aid or reworking our initial idea. As a result, we came up with a long-handled sock aid as our prototype P2 (see video below). Our team sent both ideas to our client and he liked the P1 prototype. However, after careful consideration of instructor’s feedback as well as functional utility, we decided to pursue the P2 option further. Hal approved of the idea and provided insightful questions concerning the length of the handle and wing functionality.

Thus began the long journey of revisions, as shown by the pictures below. 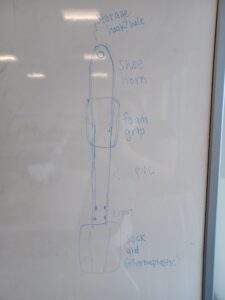 We came up with what we thought was the final sketch of P2 (how naïve we were!) and figured out the measurements for our design. Using scraps of thermoplastics, we created a mini version but thanks to instructor’s advice, we learned that we needed to create a real version that was able to be tested and manipulated. 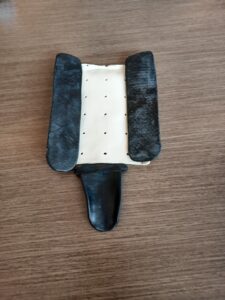 Soon after we began this revision process, we realized using a long handle might actually be more difficult than just using ropes for the sock aid. This was sad news as we had sanded, oiled, and prepared a wooden dowel to be used for the project.

With the help of instructor feedback every few revisions and after many tests, we had many other mini realizations during this design process. Our team went through at least 10 different variations using the same initial scrap of thermoplastic (the poor thing). We tested the grooves, various measurements, inclines, ropes, angles, and more. 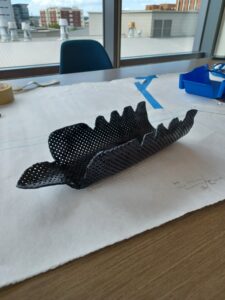 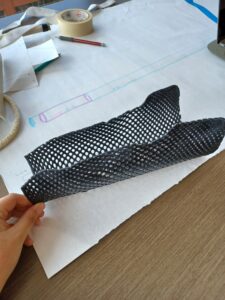 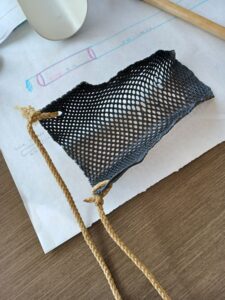 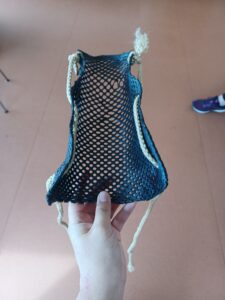 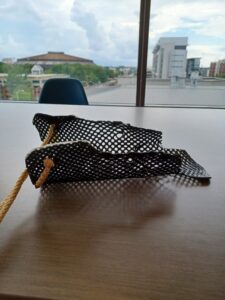 Pictured below is our final prototype. We lengthened and smoothed the end into more of a point so that it would double as a shoe horn. We added a long hole between the rope holes to serve as a handle for when the user is doffing socks. The feature that most helped the sock aid to be effective in bring the sock all the way up to the knee is a pair of notches near the rope holes, one on each side (idea credit to Hannah!). When the top of the sock comes up into these notches, it is held in place until the user brings the sock past the ankle and up the calf.

We attempted to sand the thermoplastic in order to see if it would become smoother, as we noticed that if a user has sweatier feet, there can be a bit of friction when pulling the foot through the tunnel. However, it did not seem to have an effect and we scrapped the idea. 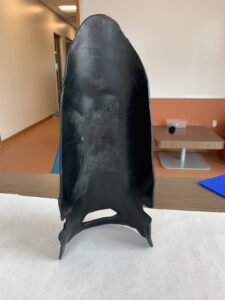 We were able to show this final prototype to Hal in person and see how it worked for him. It did pull his compression sock almost all the way up to his knee. We received feedback from him that we would incorporate into our final design: we enlarged the handle part so that it would properly fit his hand, and lengthened the ropes so that they would be a better length for him, as he tends to wrap the rope around his hands multiple times. He also mentioned the idea of putting some kind of design onto the device, like a ram or the initials of his college, which we will include on presentation day. 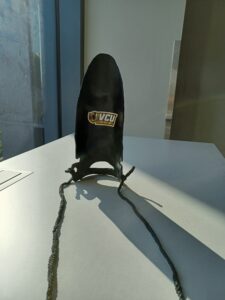 Our final design is a custom sock aid for Hal. We made a 2-in-1 device which includes a standard-use sock aid and a pointed end for use as a shoe horn. The attached ropes allow the user to throw the device by their feet without flexing at the hip, as well as to pull it up with ease. A handle allows the user to utilize the shoe horn aspect with more control. Notches by the top of the device is one of the more unique aspects of the design – it ‘catches’ the sock to help pull it all the way up the user’s leg.

We chose to use thermoplastic for its strength and pliable nature. It is able to be customizable and has a slick enough surface for the sock to move on and off of. One sheet can cost ~$85, depending on the brand and source. We also chose to use rope for its strength and longevity. It can be used over and over without wearing down or losing strength. A bundle of rope can cost between $5-10.

The length of our product (the added few inches at the end to serve as a shoe horn) makes it a bit more bulky than a traditional sock aid, and so if one so chose they could get a shoe horn to help with doffing socks that is separate from the sock aid. Alternately, we could try to incorporate a folding shoe horn into the sock aid so that it did not make it longer, but we would need to use some kind of hinge.

It is difficult to predict what kind of properties each sheet of thermoplastic will have if you are not very familiar with them. Although many pieces of thermoplastic felt the same before we molded them, some turned out to be more flexible and sticky. For our design, a thermoplastic that is strong and stiff is the best option. A more flexible thermoplastic has the tendency to compress with the pressure of the sock and can hurt the user’s foot by squeezing the sides during use.

Instead of a handle that was poked through the thermoplastic, one could incorporate a short or extendable stick attached to the back of the thermoplastic to be used to control the shoe horn part at the end of the sock aid. However, this would increase the weight and bulkiness of the design. The current hole-shaped handle also serves as a convenient place to hang the sock aid up.

In order to ensure the best presentation, holes could possibly be punched into the sides for the ropes to go through using a hole punch, if it would penetrate the hot thermoplastic material