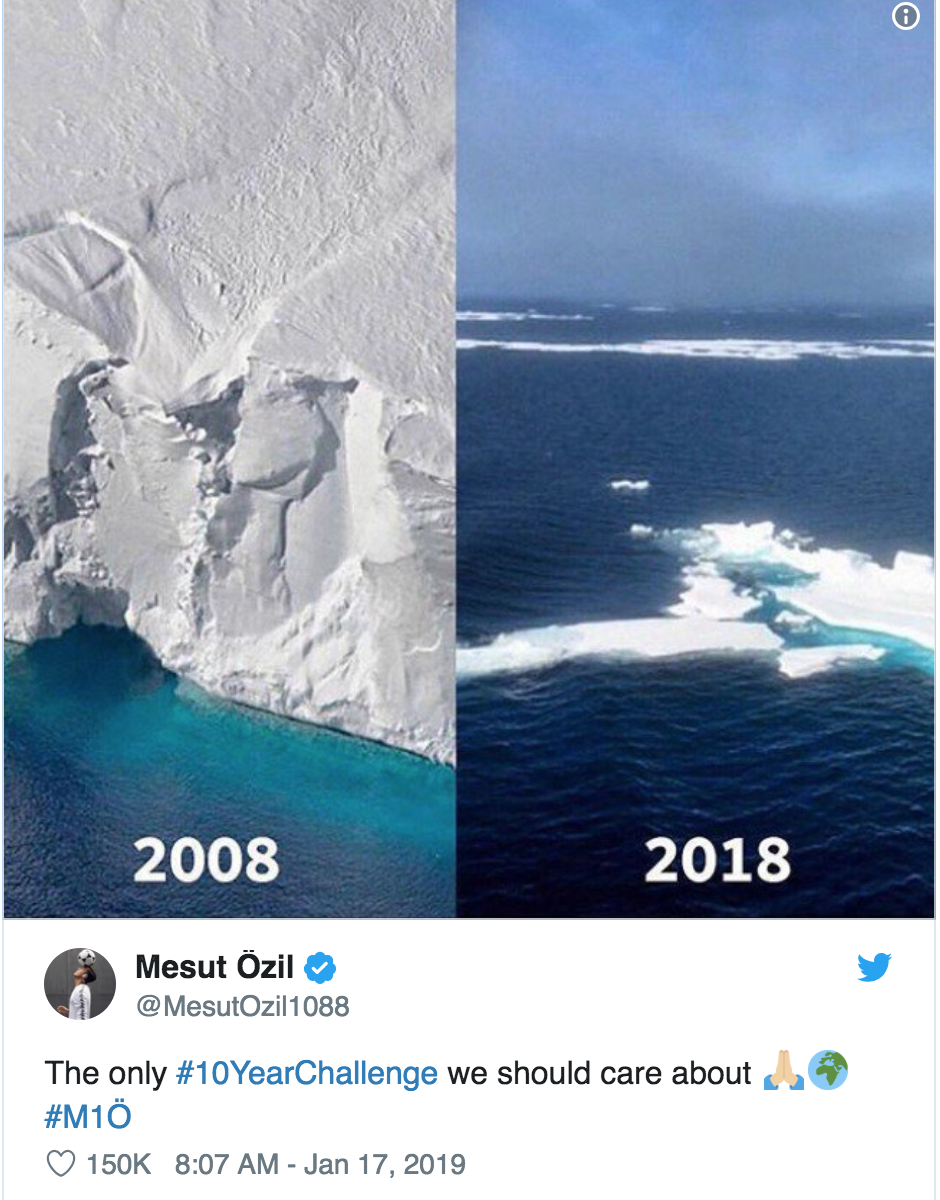 I think it was about a week ago and I was scrolling through my twitter looking at my following’s #10yearschallenge. The so-called “10yearchallenge” is basically a hashtag where people post two pictures; one from ten years ago and one from this year’ to show the change between the two pictures. I really enjoyed looking at my friends’ and people I know in general as it was funny seeing their picture from 10 years ago. I still kept scrolling through until I came across the same challenge but this time the pictures had something more meaningful to them. It was a posted by Mesut Özil, a German international football player (featured it in this blog if you want to see it). The picture illustrates the difference in the Arctic Ice between 2008 and 2018. The difference is so abundant that it’s hard to believe the picture from 2008 and 2018 were taken at the same exact place.

The glaciers that were once huge in height and width have melted and for the most part have become water. As humans, we are highly responsible for the negative changes we see in today’s world such as deforestation, and unprecedented weathers. It is crucial to understand that we will suffer as a whole if we don’t fix the way we treat ourselves as earth is the only planet we have.

For instance, this weeks weather in the U.S. was undoubtedly caused by the millions of tons of greenhouse gasses released into the atmosphere. As reported by meteorologists, the average temperature in the Arctic which is home to the Polar-Vertex has increased by about 20 degrees Celsius. The Polar Vertex is an upper-level low-pressure area lying near the Earth’s poles navigating the earth’s temperature.  This caused a lot of wind to come down south towards Canada and the Northern parts of the United States. Temperatures went as low as -30 degrees Fahrenheit in States like Chicago, Indiana as well as the Dakotas. Matter of fact, Chicago has been colder than parts of Antarctica this week, According to Reuters more than 10 people died in the United States alone and the consequences do not end here as the freezing temperatures will continue at least for the rest of the week.

Although no more than 100 people will read this blog, I want to challenge every single one of us to conserve energy. Living in dorms, as the water for the shower is already paid, most people take advantage of it by taking unnecessarily long showers and waste liters of waters. I also challenge every single one of us to turn the lights out when nobody is in the room. We have to make a change in our lifestyles before it’s too late as the rate in which the glaciers in the Arctic and Atlantic are melting can put a lot of cities and even coastal nations to completely go below sea level.