Brandee Branch, a first-year medical student and member of the 2017-2018 SCIE Ambassador cohort, is a classical pianist with a humanities and arts background. She said her experiences and “non-traditional” background have framed much of her thinking.

Brandee calls Charlotte, North Carolina home. She said Charlotte is a rapidly growing city that allowed her to see both rural and urban communities.

After graduating from Duke University as an International Comparative Studies major, Brandee took three gap years before beginning medical school at Virginia Commonwealth University. During these three years, she worked as a pharmacy technician and was involved in prostate cancer clinical trials research at the Durham Veterans Affairs Hospital.

Brandee said she chose VCU because she was interested in the School of Medicine’s curriculum, which she said allows for early exposure to clinical experience and incorporates humanistic courses including courses on spirituality in medicine and geriatrics.

She’s enjoyed watching herself adapt and grow to meet the demands of the challenging medical school curriculum.

“It amazes me how much I have the opportunity to learn every day from faculty who are experts in a variety of fields. The magnitude of information can be overwhelming at times, but when I get it, understand it and see its applications, it is exciting,” Brandee said.

Brandee said she finds that she goes through waves of feelings as a medical student.

As a SCIE Ambassador, Brandee wants to connect with the other SCIE Ambassadors. She said she’s interested in the conversations that highlight their commonalities as well as those that emphasize their differences.

Brandee said she wants to be a part of building a safe space for the members of the SCIE Ambassador cohort and other students on campus. She wants to contribute creative ways to promote inclusivity and facilitate discussion about the uncomfortable diversity topics on campus.

In her free time, Brandee pursues her artistic endeavors. She plays the keyboard to de-stress and enjoys attending art workshops. Wendy Clay is a first-year medical student at Virginia Commonwealth University and a member of the 2017-2018 SCIE Ambassador cohort.

Wendy calls Blackstone, VA home and although she attended the University of North Carolina at Chapel Hill for her undergraduate degree, Wendy says she always knew she would eventually be a VCU Ram. Her mother studied at VCU as an undergrad.

In addition to her family ties to VCU, Wendy says she was drawn to VCU’s International/Inner City/Rural Preceptorship program. The program focuses on increasing primary care physicians for medically underserved populations. The I2CRP program is appealing to her because she plans to practice medicine in a rural area.

When she first began at VCU, Wendy said she really enjoyed her orientation experience and the team building activities.

“They definitely set me up for success by allowing me to develop relationships that have been helpful since we started classes,” Wendy said.

If she could change one thing about her experience so far, she says she wishes she would have found her go-to study spot sooner.

“This is a wonderful city and as you delve into your health sciences education, take the time to understand the complexities of the place you will be calling home. It will better position you to advocate for your patients and understand the non-clinical factors impacting their health,” she advised future students.

As a SCIE Ambassador, Wendy wants to share her experiences with like-minded students. She said she wants to be a part of the solution for improving the overall experience of underrepresented students on the MCV campus.

Wendy says she’s developed the art of remaining calm under pressure and she has a calming aura that spills over to others.

After catching up on sleep, Wendy enjoys traveling in her free time. 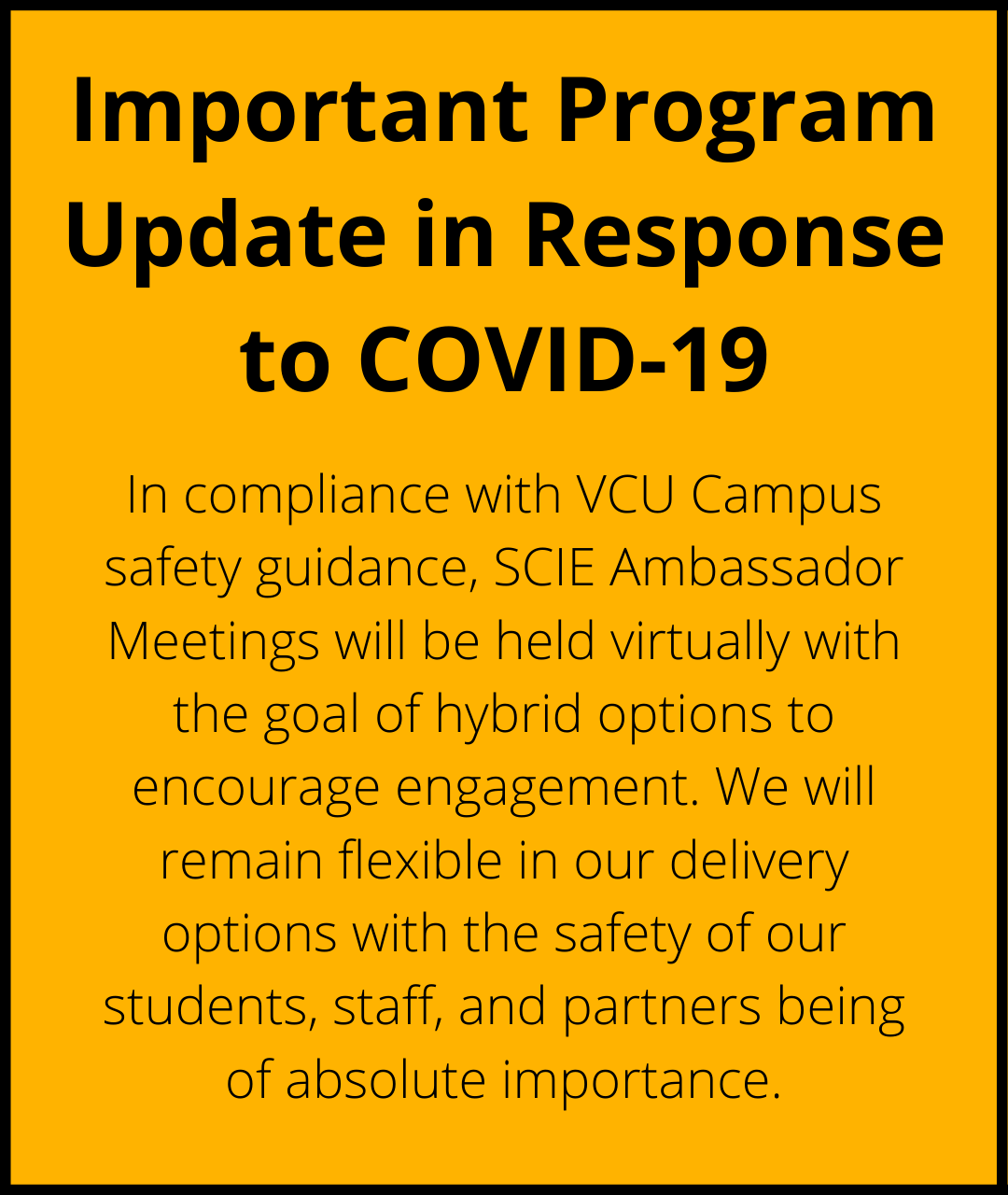 Please email studentexp@vcu.edu with any questions regarding the SCIE Ambassador Program.
Privacy Statement