When searching for information about intersectionality, I stumbled upon IWDA – International Women’s Development Agency. According to their website https://iwda.org.au/what-does-intersectional-feminism-actually-mean/ – the word intersectionality was ‘first’ used by Kimberle Crenshaw. “While still a student studying to be a lawyer, she saw that gender and race were looked at as completely separate issues. To Crenshaw, studying them in isolation to each other made no sense. She saw that women of colour, for example, are doubly discriminated against, particularly in law.”

I found this video very helpful to understand what intersectionality is as well. I think of it almost like comorbidity in psychology, which is the presence of more than one mental disorder, for example having depression as well as having anxiety. The interaction between those two disorders can make life harder for an individual, and the same is true for discrimination. For example, being a black, trans women who identifies as lesbian would increase the likelihood of discrimination against that person.

The Merriam-Webster dictionary defines intersectionality as many forms of discrimination that combines, overlaps, and intersects with each other.

I found this interview to be interesting, not only because of its timeliness, but because it goes into depth about what intersexuality is and how it is such a problem within different aspects of what we know culture to be today. It goes into more detail about how the overlapping of these social injustices, begin to lead to other injustices which then forms a whole new forms of injustices. She shined a light on intersectionality by showing the effect that it had on women of color. This showed me how intersectionality has an effect on a population of individuals and how that no matter the situation that there is a possibility that these same individuals can be targeted for simply associating with a group of people. 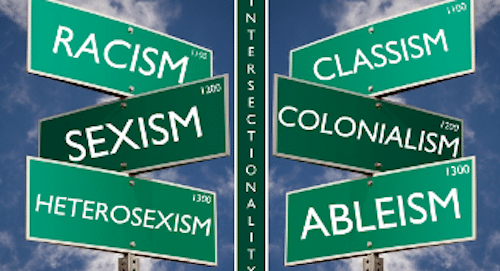 English by oxford definition of intersectionality.

https://en.oxforddictionaries.com/definition/intersectionality…. The interconnected nature of social categorizations such as race, class, and gender as they apply to a given individual or group, regarded as creating overlapping and interdependent systems of discrimination or disadvantage.

What that means to me is, Intersectionality is about promoting equal rights for everyone! Angela Couch

While finding research on the topic of intersectionality I found that a lot of what intersectionality is, is primarily revolved around women which I found to be very interesting. I found it to be interesting because it tackled women’s rights from a different angle, and not the typical “equal labor, equal pay” whether it was more social justice and equal treatment for all women regardless of race, color, or ethnicity. This article that I found in particular talked about the disparates of not only being black or a women, but being a black women in society. It was mentioned in the article why it is important to tackle problems that revolve around diversity and inclusion before the problem of intersectionality is mentioned, because those diversity and inclusion problems are key to what lead to problems of intersectionality. I personally did not know intersectionality was a thing, let a known a problem until it was introduced to me in this class. This article goes into great detail about what intersectionality is, the problems that arise, and how to properly fix this ever growing issue.

Brittney Packnett quotes “There is no such thing as a single issue struggle because we do not lead single issue lives”, she gets this quote from Audre Lorde and then continues to explain that many people use the term intersectionality but do not know the true meaning of the term. It is not necessarily a term but it is a way of living for many, such as the popular example of being a black woman. Packnett later further explains that intersectionality is an experience that cannot be pushed aside for convenience, but the experience is greater than the sum of racism and sexism. Intersectionality is a way to explain to others the effects of being a part of an oppressed society within a country that was not made for African Americans, Asians, hispanics, or women in general. This is just merely an example of who falls under the term of intersectionality, yet there are many more ways that one can fall into the categories of intersectionality as though now we live in a society that pushes people to be who they are and who they are comfortable as.

So this was a simplified example of intersectionality explained. I personally do better learning through the simplified version of things so this was kind of perfect. I think that though this video is very cute and made me smile listening to kids talk about such a huge discussion topic it also pointed something else out to me. These kids explained a topic that most adults don’t understand in a way that other kids could understand as well as adults. This basically meaning that there is no complex understanding to this and that adults can not use the excuse of it being too complicated as a reason to not respect it. Literally kids understand this. Adults who could learn about the definition and then try to say they don’t understand are just choosing to ignore it. It’s easier for people to ignore intersectionality than it is for them to actively engage in understanding it.