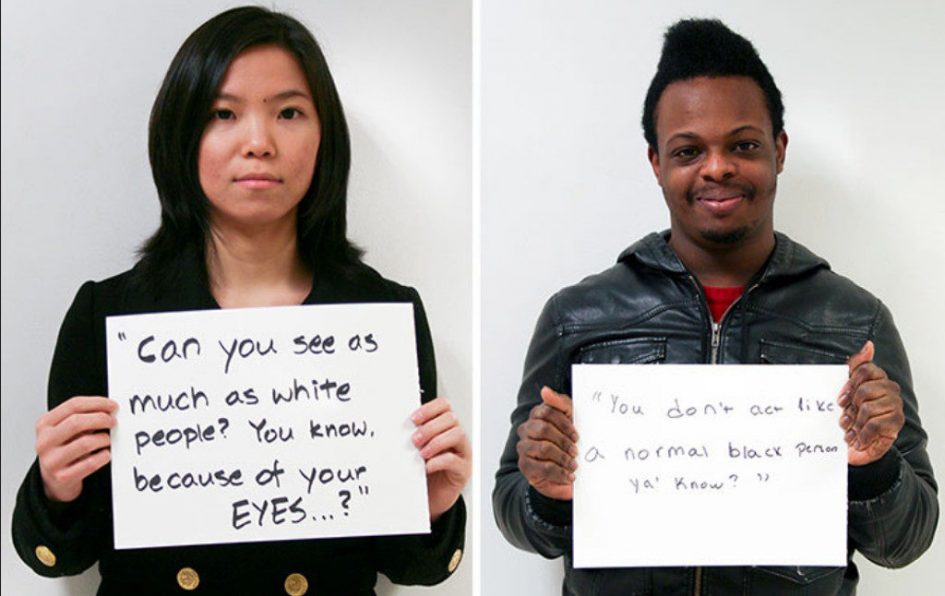 I found this video very interesting because the conversation that’s going on it’s in a very diverse group, and it gives us examples of different types of microaggressions, not only related to race, which I found very helpful in understanding what a microaggression is.. (Diana)

Psychology Today provides a more in-depth definition of what Microaggressions are. The site states that “Microaggressions are the everyday verbal, nonverbal, and environmental slights, snubs, or insults, whether intentional or unintentional, which communicate hostile, derogatory, or negative messages to target persons based solely upon their marginalized group membership.”

This is the most concise, relevant, and informative video I came across.  What all of the interviewees have to say is on point, but the words of Kimoko Matsuda-Lawrence (who begins speaking at the 1:44 mark) and Catherine Pemberton (shown at 3:12) stuck out the most to me. I appreciate how Matsuda-Lawrence speaks about the importance of having the terminology to describe things like microaggressions in order to stop them from being dismissed and understated.  Pay close attention to what Pemberton, a social worker herself, says at the end of this quick video – It’s something we should all keep in mind as we move forward in our professional careers.

In the presented video, a young African-American wrestler a high school in New Jersey, Andrew Johnson, is forced to cut off his dreadlocks or forfeit the match against his opponent. The referees and surrounding encourages on the floor are forcefully removing his dreadlocks while the crowd boos. While there are rules within the sport about that list hair being out of the faces of players during matches, the news anchor as well as people via social Medicare struck with confusion. For other long-haired wrestlers, a wrap is given to protect the hair of the athlete. So why did this referee not allow for that same gesture. The scene is degrading for Johnson and forces him to choose between his “blackness” or his team. Later, the referee, Alan Maloney, took to twitter to apologize for being insensitive to the matter and deny racist allegations against his character. Maloney, however, failed to mention his one year suspension from refereeing games after he called a fellow black referee the N-word during a disagreement. While they are never acceptable or right, microagressions do present themselves unconsciously and unintentionally. But in instances such as these, such acts stem from aware and prejudiced minds. What may look like a small act to some, the bigger picture is much more damaging to the victim of microagression. In front of an entire crowd, targeted, African-American Andrew Johnson had to endure humiliation all in the name of being “a team player.” -Michaela Hatton

Microagression in the Classroom

The attached link lists many ways microagression is presented in the classroom from teachers. While some may seem obvious, many we may not have even realized until we became more aware growing up. Here few of the ones I found most interesting:

I started to think about all of the diverse and unique names I heard growing up in the classroom during the first day of school. Many times the students would say their full birth given name, then shyly give a shortened or Westernized version of their name, or a completely different one in general. I wonder if this was out of convince or due to experience with teachers constantly mispronouncing their names and butchering it embarrassingly. Have any of these listed microagressions happened to you? -Michaela Hatton 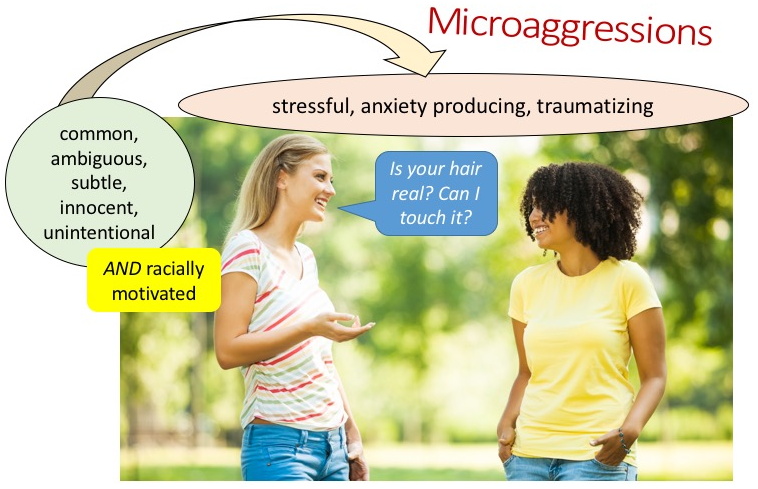