To apply the ideas of gender roles to my life, I looked at gender stereotypes and common gender roles of ballet dancers. In the age of romantic and classical ballet, women were the stars and men were there to assist the women in lifts and turns and so on. Women had to be feminine to play the roles while men were masculine. As dance has evolved and time has progressed, these stereotypes changing. If you were to compare ballet to the rest of society at any given point in history, ballets are representative of society as a whole meaning the romatic era when women were potrayed as feminine, women of society were also widely viewed as supposed to be feminine. Today ballet isn’t all about the queen ballerina floating across the stage. The athleticism of ballet is shown in women and men creating a power that women in ballet did not always have and creating a spotlight for men to be more than an assistant for the ballerina.

In this article and video clip, my friend Ivan Putrov’s show Men in Motion is described and is extremely relatable to this chapter on gender. The stereotypes which male ballet dancers face include being “feminine, homosexual, wimp, spoiled, gay, dainty, fragile, weak, fluffy, woosy, prissy, artsy and sissy,” according to a 2003 sociological study (https://en.wikipedia.org/wiki/Western_stereotype_of_the_male_ballet_dancer). The truth about male ballet dancers is that they are incredible athletic. Many male roles require a feminine characteristic and seeing a male ballet dancer create femininity is something very beautiful, just as seeing a female ballet dancer embody a strong masculine role is pleasing. In Ivan Putrov’s show, there are no female ballet dancers, it’s all about the men. This show has gained impressive traction in Europe, and hopefully will come to America sometime soon because it is such a unique creation that is inspiring to ballet dancers and to creating updated gender roles.

The Richmond ballet is presenting a show called Window’s in the Fall of 2015. In this program, the eras of ballet are all expressed almost like a view of ballet through history. This summer, my ballet class has been working on the first movement of the show that is the style of romantic ballet. Romantic ballet is all about ethereal movement and emotions. The second movement is about Russian classical ballet and the last movement is in the style of modern and futuristic dancing. Each section requires different gender roles and acting skills which creates a really interesting piece when put together. 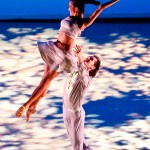 Gender roles are very important in ballet. For a long time the roles have been very traditional, but more change like the Men in Motion show, has promoted a wider range of gender roles for female and male ballet dancers. I believe that maintaining the classical ballets with traditional roles is important because they’re a part of ballet history, but developing new ballets and pieces is very important too. There’s always a story or an emotion behind dancing and choreographers can use ballets as a way of saying something. People like Ivan Putrov are using dance in a very powerful way to make a statement. This is something that supports changing gender roles and allows dancers new freedoms in their movement and characteristics on stage.