A quote from Bonnie Frickson, helps us to understand the effects of centrality, “I argue that interpersonal processes vary with the kind of larger structural unit within which individual ties are embedded.”  Not all central nodes are created equal and to provide context, different forms of centrality must be defined. 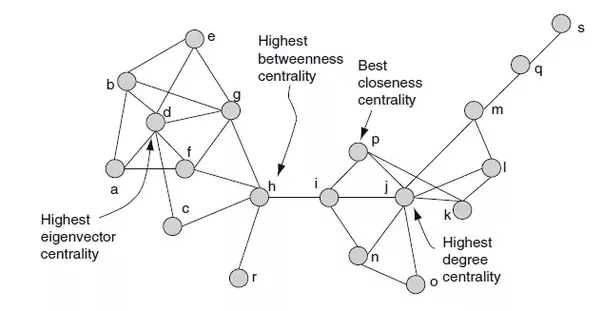 Eigenvector Centrality: deals with connections to high scoring, influential nodes.  The more highly regard the connected node, the more power is afforded to the central node.  This is consistent with power by association.

Closeness Centrality: is measured by the closeness  of a central node to other nodes.  Friends that are very close friends are more likely to help one another out thus providing power to each individual friend.

How can this understanding of node centrality be applied?   They can shed light on the types of connections that form throughout nature and society.  The concept is embodied in small-world networks.  These networks maximize connectivity while minimizing the resources needed for connections.  The power that is garnered from different forms of node centrality take on the form of efficiency in small-world networks.

Efficiency is increased as inefficient connections are pruned.  This process is termed cortical plasticity as explained by Nobel Prize Laureate Eric Kandel (Kandel et al, 2012).  In essence, the human brain is born with many neural connections, but only neural connections that are efficient and productive get activated and reinforced over time.  Cortical plasticity is greater during early childhood and explains the ability of children to pick up new languages and learn new musical instruments very quickly.  It also explains how adults can still learn new functions throughout their lives, because some degree of plasticity persists.

By analyzing these small-world networks people have already derived a great deal of efficiency in other contexts.  For example the small-world network organization of the Fibonacci sequence has been applied to break complex codes in cryptography (Baldonia, 2009) .   It could also be applied to the design computers that maximize performance using the technology we have available.   In what other areas can you see a small-world network being applied?

It is up to us as social network researchers to understand intimately the structural differences between nodes and connection in order to elucidate how small-world networks can be applied more broadly.  To help us get there we need “reliability and validity of network measurement,” as a foundation for more and more complex network analysis (Robins).