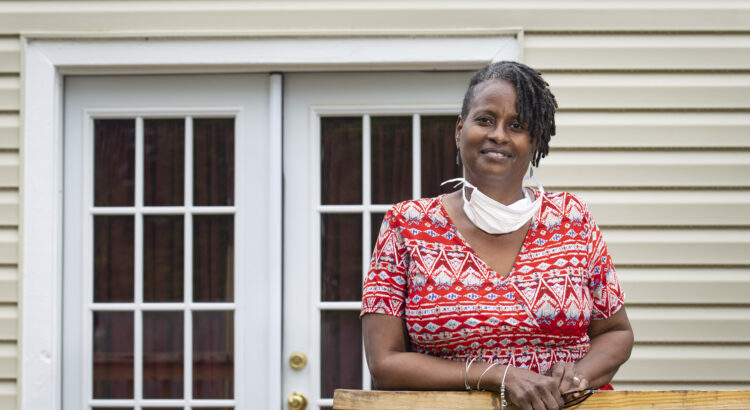 The Henrico County resident was admitted to Virginia Commonwealth University medical center on March 26 and wasn’t released until April 9. But it didn’t feel like 15 days.

“I didn’t think I’d been there that long,” she says. “They all roll together.”

White is just one of the 1.3 million confirmed cases of COVID-19 in the United States. And, if her story is any indication, we’re just beginning to understand the impact of the pandemic on each person that experienced it firsthand – most of whom have survived.

Survivors like White, their family and friends, and the healthcare workers on the frontlines of the pandemic faced an unknown threat with courage and resilience.

“It’s such a darkness with this illness,” says White, who moved to Richmond from Chesapeake in 2019 to be closer to a daughter. “It’s such a dark place, and it’s confusing.”

But her providers at VCU medical center brought light and hope. The chance to join a clinical trial gave her purpose. And her faith led her through.

White, 61, started feeling sick around March 19. A rash on her arms and legs told her from experience that she had some sort of infection. Doctors at a local clinic diagnosed it as bronchitis and sent her home with an antibiotic and steroid.

White felt better, but as COVID-19 cases began to increase in Virginia, her primary care physician recommended testing for it as a precaution. White and her husband drove to Hampton for a test on March 24. It wasn’t a pleasant experience. “It goes so far up your nose,” she recalls.

Results would take four days, they were told. But the next day, White’s cough worsened and her body temperature wouldn’t regulate. “I had on two pair of flannel pajamas, a flannel robe, two pair of footies, two blankets, sitting in front of the heater and I could not warm up,” she says. “And I just kept coughing.”

The night of March 26, White awoke in the middle of the night to a sensation she’ll never forget.

“I got up to go to the bathroom, and it was like I went up in flight, the change in altitude on a plane. The weight of the air was on my chest, and I couldn’t breathe,” she says. “My vision was cloudy, blurred.”

Despite the bathroom being mere feet away, the path was unclear. She missed the toilet and injured her ankle in the fall. She tried to call to her husband in the living room, but she couldn’t scream.

White finally returned to her blurry bedroom. “My nightstand was there and everything on my nightstand looked like it was falling off. I’m trying to hold everything, so nothing’ll fall, and then it hit me: this stuff isn’t moving. This is me,” she says. “That’s when I dialed 9-1-1.”

The first responder recorded her temperature at 105.

Admitted to the hospital and later diagnosed as positive, White was isolated on a floor with others that had COVID-19. But she was alone in her room. Her only connection to her large, close-knit family was through video chats and calls.

White admits the calls from family were sometimes difficult.

The damage to her lungs caused by the virus made talking exhausting – and the mental gymnastics of keeping a positive outlook added to the exhaustion. But the calls reminded her “how much love I have.”

Alone in the hospital, it was difficult not to dwell on the plans she had made for spring.

White and her husband were supposed to go to Texas in April to see kids and grandkids. A long-time dream to attend a horse race with girlfriends – complete with derby hats – was cancelled. And White had a backyard cookout planned for her husband’s June birthday, a playlist of his favorite music already put together.

White credits VCU Health nurses for getting her through the lonely, isolating experience of hospital in quarantine.

“I had four nurses. I have their names written down, and as soon as this is clear and I can go there, I have to thank them in person,” White says. “I don’t think I would have pulled through if it weren’t for them.”

They created a sitcom-style family with roles and campy scenarios. One nurse brought her product for her hair. They danced to the playlist White had compiled for her husband’s birthday.

“Minutes into meeting Ms. White, I could tell she had a great sense of humor and we were going to get along seamlessly. We made the best of a bad time together,” says Elizabeth Cox, one of White’s nurses. “If I can create a happy moment for one of my patients, even if it’s just for a few minutes, I feel like I did my job.”

Deciding to join a clinical trial was an easy decision.

“I just felt like, that’s the least that I could do to contribute to cleaning up this mess,” says White. “The coronavirus is affecting the bodies and organs in a way that nothing else has.”

White enrolled in the trials for sarilumab at VCU, one of several active clinical trials for COVID-19 patients. Like other drugs that VCU doctors are testing as a treatment of COVID-19, sarilumab is approved to treat rheumatoid arthritis, a disease that causes inflammation. The hope is that it can allay the dangerous inflammatory effects of COVID-19 on the lungs and keep patients off a ventilator.

White was on oxygen while hospitalized but never needed a ventilator to breathe.

“We’re so grateful to patients like Kathy for joining in these trials,” says Antonio Abbate, M.D., Ph.D, a co-investigator on the sarilumab trial and an associate director at the C. Kenneth and Dianne Wright Center for Clinical and Translational Research. “The only way to learn more about this disease – and to save lives – is research and trials. The data we can contribute with the help of volunteers like Kathy are invaluable.”

VCU Health clinicians, with the help of the Wright Center, activated quickly to bring experimental drugs like sarilumab to the hospital at the start of the global pandemic. Patients treated at VCU Health had access to treatments only available at a major research institution. And nearly all the patients at VCU Health with COVID-19 volunteered to participate in one of the trials.

“To be able to survive it, you just feel like you’ve got to do something,” White says.

Though some participants receive a placebo, White knows she received the drug. Within a week, her lungs started improving. She’s grateful her treatment was a success, especially seeing the toll that the virus took on her providers, who took their own risks to be there.

“I started figuring I needed to live for them,” White says. “They were willing to die for me.”

What comes after the virus

White feels guilt about whom she might have infected unknowingly, before her diagnosis. She called everyone she could think of that she had been close to, and those calls haunt her, even knowing that the people are now fine.

Her husband, who is 67 and whom White initially feared for most, has thankfully evaded infection. But White’s guilt leads her to worry about rejoining the world, even after she’s given the all-clear by the health department.

“I know I can’t stay in this house forever,” says White, whose salary pays most of the bills. “But I don’t want anybody to come to my house, and I don’t want to be around anybody because the thought of passing this to somebody scares me. It scares me a lot.”

Her voices quivers to think of putting someone else through what she went through. And she fears people’s reaction to her when she returns to work.

On a personal level, White struggles to come to terms with her survival, as she sees others who have lost family and friends.

“I don’t want to feel ungrateful for my life. But I didn’t want to celebrate it either,” she says. “Why did I survive? I’m not the greatest person.”

White also worries about the healthcare providers, like her caregivers at VCU Health. They tried to put on brave faces for her, she says, but White could tell they were anxious for their patients.

Now at home recovering, White gets winded easily and trembles some. Staff from the sarilumab trial team have come to visit her and checkup.

White is phasing back into work, and she still hopes to attend her first horse race this year. She has ambitions for planting her garden, and she’s looking forward to some good meals.

White lost her sense of taste and smell in late March, a common symptom of COVID-19, and it has not yet returned. Her favorite dish of baked salmon over rice and greens tasted like eating cooking oil out of a spoon, she says. White gives herself pep talks to get herself to eat.

“My husband bought me some crab legs, and I said, ‘No, let’s put them in the freezer,’” she says. “I’m not going to waste these babies.”

White wants people to take the coronavirus seriously, but she’s concerned for a world where we can’t be close – where hugs and handshaking are dangerous. Because, she says, that’s exactly what the world needs more of: love, kindness, forgiveness.

A version of this story appeared on the VCU Health news center on May 20, 2020.